1999 - Earl’s Court Exhibition Centre, London, England
Soundcheck included: Instrumental #1 / Instrumental #2
Support: Stereolab
Set: Lotus / Crush With Eyeliner / Suspicion / New Test Leper / The Apologist / Pilgrimage / Daysleeper / The Wake-Up Bomb / Electrolite / Driver 8 / Sweetness Follows / At My Most Beautiful / Losing My Religion / The Great Beyond / Find The River / Pop Song 89 / Life And How To Live It / Walk Unafraid / Finest Worksong / Man On The Moon
Encore: I’m Not Over You (Stipe solo) / What’s The Frequency, Kenneth? / Tongue / Gardening At Night / It’s The End Of The World As We Know It (And I Feel Fine)
Notes: ‘Gardening At Night’ is played for the first time since 1986.
Review 1995 - Madison Square Garden, New York, NY
Support: Luscious Jackson
Set: I Took Your Name / What’s The Frequency, Kenneth? / Circus Envy / Turn You Inside-Out / Crush With Eyeliner / Try Not To Breathe / Undertow / Welcome To The Occupation / Bang And Blame / Strange Currencies / Revolution / Tongue / Man On The Moon / Country Feedback / Half A World Away / Losing My Religion / Orange Crush / Finest Worksong / Get Up / Star 69
Encore: Let Me In / Everybody Hurts / So. Central Rain (I’m Sorry) / Departure / It’s The End Of The World As We Know It (And I Feel Fine) I saw this when it was screened in '95. One of my favorite R.E.M. live performances.

Pyramid Stage, Glastonbury Festival Of Contemporary Performing Arts 1999, Worthy Farm, Pilton, England
Other acts performing: Bjorn Again, Ian Dury, Barenaked Ladies, Blondie, Bush, Hole, Beautiful South
Set: Lotus / What’s The Frequency, Kenneth? / So Fast, So Numb / The Apologist / Fall On Me / The Great Beyond / Daysleeper / The Wake-Up Bomb / The One I Love / Sweetness Follows / At My Most Beautiful / Losing My Religion / Everybody Hurts / Walk Unafraid / Star 69 / Finest Worksong / Man On The Moon
Encore: Why Not Smile (Mills & Stipe) / Crush With Eyeliner / Tongue / Cuyahoga / It’s The End Of The World As We Know It (And I Feel Fine)
Notes: Michael dedicated ‘Sweetness Follows’ to Jean Eavis, wife of the organiser of Glastonbury Michael Eavis, who died of cancer a few weeks before. 1999 - Arena Oberhausen, Oberhausen, Germany
Support: Wilco, Suede
Set: Lotus / The Wake-Up Bomb / So Fast, So Numb / Sitting Still / Suspicion / Fall On Me / The Apologist / Driver 8 / Daysleeper / The One I Love / Sweetness Follows / The Great Beyond / Losing My Religion / Find The River / At My Most Beautiful / Walk Unafraid / Pop Song 89 / Finest Worksong / Man On The Moon
Encore: I’m Not Over You (Stipe solo) / Why Not Smile (Mills & Stipe) / What’s The Frequency, Kenneth? / Crush With Eyeliner / Tongue / Cuyahoga / The Passenger / It’s The End Of The World As We Know It (And I Feel Fine)
review On this day in 1991 R.E.M. appeared on the cover of Rolling Stone for the third time. 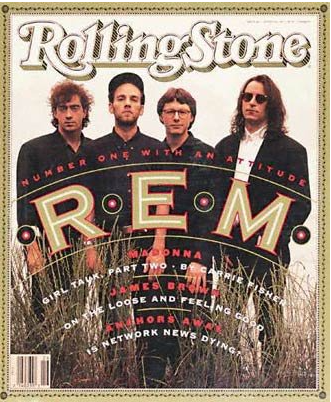 On this day 28th June 1995 - Orange Stage, Roskilde Festival 95, Festivalpladsen, Roskilde, Denmark
Other acts performing: Les Tambours Du Bronx, Dizzy Mizz Lizzy, Page & Plant
Set: What’s The Frequency, Kenneth? / Crush With Eyeliner / Drive / Turn You Inside-Out / Bang And Blame / Undertow / I Took Your Name / Strange Currencies / I Don’t Sleep, I Dream / Revolution / Tongue / Man On The Moon / Losing My Religion / Departure / Pop Song 89 / Finest Worksong / Get Up / Star 69
Encore: Let Me In / Everybody Hurts / It’s The End Of The World As We Know It (And I Feel Fine) 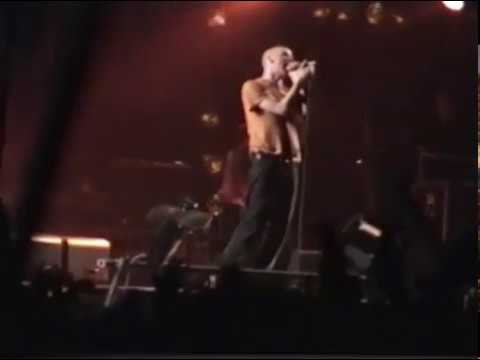 R.E.M. took up a five night residency at The Olympia, many of the songs for their 14th Studio album Accelerate (March 2008) was debuted.
Live At The Olympia was released as a live album in October 2007

“Until The Day Is Done” Someone on YouTube recently tried to tell me these shows at the Olympia were a “tour.” I tried to explain the difference between a tour and residency but they would have no part of it. On a more positive note, these shows are one of my favorite things R.E.M. did in the latter part of their career. In fact, they may be my most favorite thing.

It was late last night when I posted & too tired to elaborate more. You’re right, it was a residency at the Olympia Theatre, and many of the songs from Accelerate were debuted. I’ll edit my previous post to include that. I remember there were downloads made available at the old Murmurs site from Olympia & if I remember right also during the recording of Accelerate & little snippets of rehearsals, , that was exciting and fun, and we were invited to put them together & create a video for the new songs. I remember seeing a really good one someone did of Supernatural Superserious.

From this day in 1985. Per the R.EM. Timeline, Stipe sang live to a backing track.