We’ll use this thread to document things a day.

Today, from the REM timeline.

11 February 2005 - Weiner Stadthalle, Vienna, Austria
support: The Thrills
soundcheck included: Make It All Okay / How The West Was Won And Where It Got Us
The Thrills set included: The Curse Of Comfort
R.E.M.: Finest Worksong / Departure / Undertow / Animal / Boy In The Well / Electrolite / High Speed Train / Everybody Hurts / Electron Blue / 7 Chinese Bros. / Leaving New York / Orange Crush / I Wanted To Be Wrong / Final Straw / Imitation Of Life / The One I Love / Walk Unafraid / Losing My Religion
encore: What’s The Frequency, Kenneth? / Drive / The Ascent Of Man / The Great Beyond / I’m Gonna DJ / Man On The Moon
notes: Peter played mandolin on ‘The Curse Of Comfort’ during The Thrill’s opening set

Love this. The live discs (I just call it the red one) from Dublin, my favorite concert, Daniel Ryan on that song (the thrills, but with my memory issues even tho it’s my fave concert, the song escapes me…

I think he played on Rockville with Mike?

Yeah! I just could not get that name out. (My brain is doing weird things, I’ve been to doctors, it’s getting worse)

Oh no, I hope things improve for you soon!

Thank you, sweet of you t say❤️

12 February 1985 - Uptown Lounge, Athens, GA
support: Dark Harvest
set included: Feeling Gravitys Pull / Hyena / Maps And Legends / Good Advices / Driver 8 / Can’t Get There From Here / Kohoutek / Auctioneer (Another Engine) / Little America
encore included: Life And How To Live It / Under My Thumb
notes: Playing under the pseudonym ‘Hornets Attack Victor Mature’, the band performed mainly new songs that were eventually recorded for the upcoming ‘Fables Of The Reconstruction’ album, along with The Rolling Stones song ‘Under My Thumb’. First performances of ‘Feeling Gravitys Pull’, ‘Maps and Legends’, Can’t Get There From Here’ and ‘Life And How To Live It’.

15 February 1995 - Velödromo De Anoeta, San Sebastian, Spain
support: Grant Lee Buffalo
set: What’s The Frequency, Kenneth? / Circus Envy / Try Not To Breathe / Drive / Crush With Eyeliner / You / I Don’t Sleep, I Dream / Monty Got A Raw Deal / Revolution / Tongue / Man On The Moon / I Took Your Name / Country Feedback / Losing My Religion / Departure / Star Me Kitten / Me In Honey / Finest Worksong / Get Up / Star 69
encore: Let Me In / Everybody Hurts / Pop Song 89 / Bang And Blame / It’s The End Of The World As We Know It (And I Feel Fine)
notes: 'Departure’ is played live for the first time. This show can be found on the double CD "Espana '95"

On this day in 2011 Collapse into Now was released in North America, It had been released outside of North America the previous day. At the time, there much speculation here that it was their last. I took it with a grain of salt because I’d heard the same thing before regarding some of their previous latter day albums. Then, in late September it was confirmed when R.E.M. announced they were disbanding. Mills and Stipe both said the album was rife with clues that it was their last album, including Stipe waving goodbye on the cover. Some took the similarity to previous songs to be a sign of laziness and/or that their creative well had run dry. I was of the opposite mind, I felt they were conscious nods to previous works which made complete sense to me given it was their last album. Some of the strongest of those accusations were aimed at “Blue,” which many felt was nothing more than a mashup of “Country Feedback” and “E-Bow the Letter,” complete with backing vocals from Patti Smith. I listened to it just now for the first time in I don’t remember how long and it still carries as much emotional weight as it did when I heard it for the first time 11 years ago. That said, I don’t often revisit anything outside of their I.R.S. era works with the notable exceptions of New Adventures in Hi Fi and Up. I have nothing against the other albums, it’s more that I consider the I.R.S. era to be my favorite and New Adventures in Hi Fi and Up to be my favorite albums outside of that. All things considered, Collapse into Now was a strong effort to go out on when it very well could have been Around the Sun.

From the R.E.M. timeline. 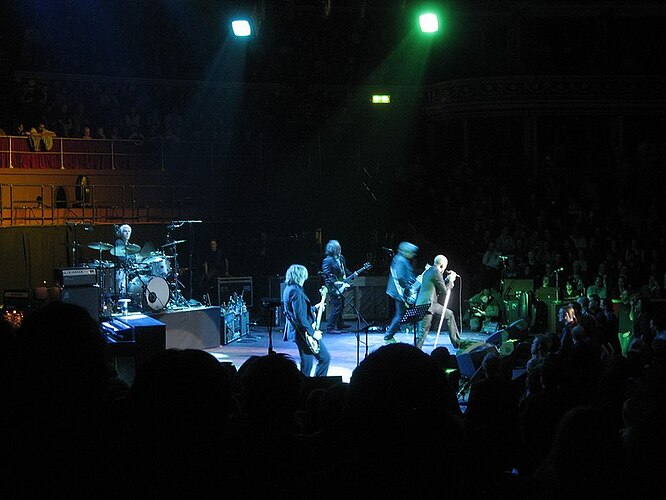 25 March
“On this day in 1987, R.E.M. played a small show in their hometown of Athens, Georgia. According to setlist.fm data, the 9-song set at Uptown Lounge featured four live debuts including sprawling single, “It’s the End of the World as We Know It (And I Feel Fine).” This was months before the release of their 5th studio album, Document …”

27 March 1989 - Senator Nat G. Kiefer University Of New Orleans Lakefront Arena, New Orleans, LA
support: Indigo Girls
set: Pop Song 89 / Exhuming McCarthy / Welcome To The Occupation / Disturbance At The Heron House / Turn You Inside-Out / Driver 8 / Be All You Can Be - Orange Crush / Cuyahoga / Feeling Gravitys Pull / Time After Time (Annelise) / We Live As We Dream, Alone - World Leader Pretend / Begin The Begin / Tired Of Singing Trouble - I Believe / Pretty Persuasion / Get Up / Auctioneer (Another Engine) / It’s The End Of The World As We Know It (And I Feel Fine)
encore 1: Stand / Fall On Me / You Are The Everything
encore 2: Finest Worksong / King Of Birds - Letter Never Sent / Swan Swan H / See No Evil
encore 3: Harpers / Summertime / Strange / Crazy / Perfect Circle / After Hours
notes: This show can be found on the vinyl bootleg “New Orleans”.

It would be great if this thread continued…

R.E.M.: Pop Song 89 / Exhuming McCarthy / Welcome To The Occupation / Disturbance At The Heron House / Turn You Inside-Out / Maps And Legends / Be All That You Can Be - Orange Crush / Cuyahoga / Feeling Gravity’s Pull / Time After Time (Annelise) / We Live As We Dream, Alone - World Leader Pretend / Begin The Begin / Get Up / Take Five / Pretty Persuasion / Go Daniel - Tired Of Singing Trouble - I Believe / Auctioneer (Another Engine) / It’s The End Of The World As We Know It (And I Feel Fine)
encore 1: Stand / Sitting Still / You Are The Everything
encore 2: Finest Worksong / King Of Birds - Letter Never Sent / See No Evil
encore 3: Dark Globe / Harpers / Summertime / Crazy / Perfect Circle / After Hours
notes: Michael joins the Indigo Girls on ‘Kid Fears’ as part of their opening set. After ‘Get Up’, Mike, Peter & Bill played Dave Brubeck’s ‘Take Five’

I saw them twice on this tour, Chapel Hill, NC with Drivin’ n’ Cryin’ opening and in Greensboro with Pylon opening.