I’ve had these speakers in my house for over 20 years, they still sound great. I removed the covers to show them off. I should have carpet in the room, or have them on a rug, I believe it improves the sound. If I have them up too loud the floor vibrates. 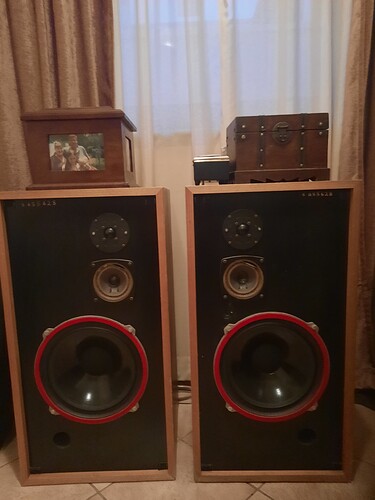 Nice! I use Klipsch powered bookshelf speakers in my living room for my turntable.

I bought a nice pair of Kef Q5 floor standing speakers off eBay locally as an upgrade on some Mission bookshelf ones, and they sound lovely. Spent a few bob on a new amp too. This one streams via Bluetooth so I can everything from LPs and CDs to Spotify and even my old iPod.

I got my mine from a local manufacturer Krix. They had this room with several sets of speakers and a couple of couches, I liked the Tannoys too, I chose my set of Krix because they had a slightly deeper sound that I liked. My first visit, the guys in the store played The Beatles - White album to demonstrate, second time I went, I brought along the Human League - Dare, one of my fav records of that time, and made my choice. Previously I had what they called a stereogram back in the day, turntable, radio and speakers all in one.

My turntable (Denon) through a Cambridge Audio Preamp, cassette deck (also Denon) and Mini Disc player (Sharp), all plug into a Denon Ceol 9, playing through a pair of Dali Zensor 1 bookshelf speakers and a Dali E9F sub woofer. This set up is my first ever hifi system. Sounds just right in my apartment.

I have a Denon turntable too!, also my amp., I got them both when I purchased my speakers, I bought an Onkyo cd player a few years later. I have a cassette player in a small Sony boom box which I don’t use very often, as I’ve replaced most of my fav cassettes on cd or vinyl.

My Denon amp includes a CD player as well - not a stand-alone amp, but has a solid sound. Hope you still have your cassettes somewhere though. I remember when I moved to Sweden early 2000s, I carried my cassettes, vinyl and CDs. People here were like, what’s this? since everyone seemed to be moving to iTunes and mp3. Look what’s happening now!

Yes I still have them, I took them out of storage for this thread - “Young Girl Discovers Cassette Tape”
I don’t think I’ve heard a music cassette played on a really good sound system. Same with digital streamed or downloaded music I’ve only heard through small sound bars, some of those punch out a lot of sound though.