So, how’s it going

I’ve been thinking about this site for a few days. I don’t have a lot to add at the moment just because I don’t. I’ve got stuff going on in my life—good stuff—but not stuff I want to post online, yet. I save my general bitching for twitter, pics for IG/FB (yes, they’re evil. I know). I really appreciated the Life and How We Live It Thread because people were really honest about how they were and are dealing with their current lives. But I don’t want everything to feel like it’s all about working around the pandemic, even if it is.

So, I’m starting a thread where people can post how their day is going, good or bad.

I’ll go first: I’m WFH today. In a few minutes I’ll leave to get my weekly PCR COVID test my employer pays for (it’s voluntary, but I work with the public so I opted into the weekly voluntary testing option). Then I’m gonna go get donuts from our new local donut shop. It’s amazing and 90% vegan and super awesome. And if someone is going to stick a giant qtip up my nose, I’m getting donuts. Tonight I’ll go to the gym, meet with my trainer and attempt to deadlift 240lbs—a new PR. My current goal is 3 set of 3 @ 250lbs. When I hit that, I’m getting a new tattoo.

Today is not as busy as yesterday, but still quite busy. I’m spending most of my time on zoom, as I’m WFH all week except I’m going into the office Thursday afternoon after a lunch meeting.

The puppy is getting spayed today, so she’s not home. My daughters school dropped outdoor masking today, so she’s super excited for that. In LA, its super nice out. High 60s and super clear.

Day off. Went to get my prescription sunglasses tightened. Most of my extention chords don’t have three prongs, so I bought some 3-2 converters. I have guitar lessons at 6:30 p.m. My teacher was interested in using my Novation Launchpad (sample pad) I might just let him look at it and us messing around with it for my lesson instead.

Good day today. Observed most of a trial for my job, here in Boston, with a plaintiff so not believable that the juror closest to me was nodding at me every time our defense counsel helped the plaintiff impeach himself on cross examination. This is the day after I first had the regional pizza specialty South Shore bar pizza, which is unique and reminded me of Chicago/Milwaukee tavern-style. Both yesterday and today the court recessed for the day at 1pm so I got out to see Harvard, hit up some lifetime-local (so local, he played in a post-Mission of Burma band with Burma drummer Peter Prescott) recommended record stores, and picked up a few things for Julia.

I’m WFH for good nowadays so not much interaction with people. Wednesdays are the day I get to wander around after work and go to my nerdy places to check for new music and/or video games. It’s also Wash Wednesday so the laundry got done while I was on Zoom putting out a fire at work which we all found hilarious because I started this job in January. So kind of a null? day? Not good. Not bad. Just existing

I kind of miss those days! This year has been nonstop it seems.

Awesome. Good for you.

Today and tomorrow are my days off, so alone at home. Since I have a weird mind and recall many of my night dreams and nightmares, also struggling with the one that made me woke up at 4 am. Another weird thing is that some of the things that happen in my dreams actually come true and this was a disturbing one…

Well, let me shut up, otherwise you guys might see me as a crazy.

Dreaming is fascinating to me. I’m the opposite, I Don’t Dream, I Sleep. Very rarely do I remembern even dreaming at all. Part of what makes R.E.M. seem mysterious to me is Michael seems to remember ALL of his. He even keeps a sleep journal (Thom has followed suit)

I’m working from home today, and putting out a few fires via email while brushing up for an upcoming environmental court case. Georgia is in that mid-February phase of “If you don’t like the weather, then don’t worry, because it will change erratically in the next few hours.”…70 degrees today, and then highs in the 40s tomorrow.

I’ll go for a run this afternoon after work.

In mid-2020, I was totally ripped, and I was running 250+ miles a month, regularly clocking in sub-2-hour half marathon distances. In August of 2020, I somehow got infected with a stomach parasite, and could not run at all for six weeks. Upon returning to running after that forced downtime, I got discouraged, because workouts that used to be easy were difficult, and I fell into a fitness malaise. I ran an 11.5-mile trail race two weeks ago and got my tail handed to me on a course that was a breeze two years ago. I’ve done the comeback thing several times before, though, so I’ve got it.

The tough pill to swallow with regard to running is that it is impossible to have a constant upward trajectory of fitness. Injuries happen and burnout happens. That tough pill is also what makes the good phases all the more joyful, though.

I ran my first marathon in 2009. Since then, I’ve completed over 55 marathons and ultramarathons, including two 100-mile races. I’ve gone though some fitness funks over the years, but I always seem to bounce back.

I had to start over lifting after my surgery in Dec 2019. I was at 220lbs the week before. I knew I’d have to start over, but I was given permission to begin lifting again March 2020. I got I. A week and a half before everything shut down. Went back it August 2020. Got sidelined again due to shut downs in November and then back in Feb 2021. So, with COVID, it took me a year to get back to where I was. Frustrating as fuck. But here I am now.

I am finding things to improve in the digital space website wise. Additionally, having a discussion with one team member who wants to update one thing, but not the other. I am let’s fix it all, and not halfway. Then there are those who just want the one update, leaving them in the same spot they were before without making any MEANINGFUL updates to move the needle.

Work from home! Thats what WFH means! I’ve been an essential worker all this time…so it never occurred to me what it meant.

Working in the office today. Meetings all day. They’re all Zoom/Teams, but I have stuff I need to be on campus for. Finished a big project yesterday, so that’s awesome.

But when I woke up this morning I thought it was Saturday. So there’s that.

Working from home but not by choice today. My son had a fever so I’m keeping him here and trying to fit in zoom meetings where I can. I’ve also had to explain to him that my initial frustration was not because he is sick but because the American Healthcare and employment systems prioritize meetings and profits and perfect attendance above all else and it makes it difficult to just take care of my kid. But, I do get cats in my zoom calls. 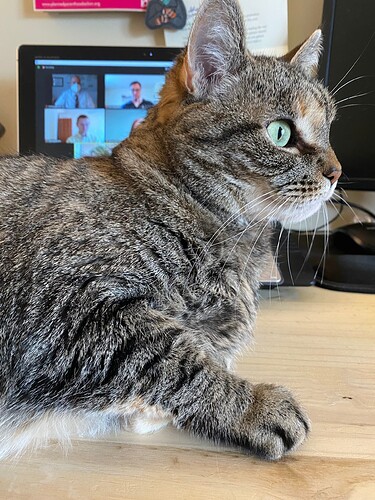 We’ve had some crazy wind storms throughout Germany yesterday and today. Gusts over 100 kph and school was closed. Both my wife and I are WFH and the 6yo joined us today.

Thursdays are cocktail night in our house and we’ll be watching Germany’s Next Top Model tonight.

Cripes, I just saw pictures. One was right outside my brother’s place by the Geeste, so I’ll really have to ask if everything’s ok with him - that is, can he go outside in wellies or does he need to swim?