I wanted to let the forum know that, after five years of research and writing, my R.E.M. biography, titled Maps and Legends, is available on Apple Books today. I asked Ethan for permission to post this announcement here on Murmurs, and he told me it was OK to do so. I will not be spamming the forum with further posts about this book, and I very much appreciate Ethan giving me permission to mention this book once here on his forum.

To give a bit of background about myself, I was born in Raleigh, North Carolina in 1968, and, from a young age, was a huge music fan. Around the time I turned 16, I begin sneaking into local clubs in Raleigh and Chapel Hill, among them the Brewery and the Cat’s Cradle, to see bands such as Black Flag, Hüsker Dü, the Replacements, the dB’s, Let’s Active, and the Connells. On September 26, 1984, I saw R.E.M. for the first time, at Duke University’s Page Auditorium, with the dB’s opening up for them. Like most people on this forum, I suspect, from the first time I saw them, I was hooked. My best friend in Raleigh was considering going to the University of Georgia because his father had gone there, so I tagged along with him when he went to Athens to visit the school, and I also ended up at UGA, where I studied English from 1986 to 1991, and also played guitar in a now-forgotten band and witnessed a little bit of what was going on in Athens during that time.

For years, I have thought about writing a book about R.E.M., and starting in 2017, I finally stopped thinking about it and started doing it. In the summer of 2018, I visited Athens and Atlanta, where I interviewed Jonny Hibbert, John Keane, Jeff Walls, and other early eyewitnesses. Sadly, not long after I interviewed Jeff, he tragically passed away far too soon. I’m grateful I got the chance to speak to him when I did. Getting to meet him and talk to him was the greatest thing that came out of this project for me. I also interviewed Kathleen O’Brien and other early eyewitnesses over the telephone. I spent five years digging up every vintage newspaper and magazine article about the band I could find. While I greatly admire David Buckley’s Fiction, Johnny Black’s Reveal, Tony Fletcher’s Perfect Circle, and Grace Elizabeth Hale’s Cool Town, I believe my book adds new details to the story that none of those biographies, as excellent as they are, have revealed.

While my book covers the story of R.E.M. from their first show at the church to the Hib-Tone single to the band’s breakup, it also digs more deeply into the band members’ childhoods and teenage years than has any previous book. If you are interested in the bands the various members of R.E.M. played in before they formed R.E.M. - Bad Habits, Shadowfax, the Back Door Band, the Frustrations, Gangster, Crossfire, and the Wuoggerz - you may find this book interesting. Likewise, more so than any previous biography, Maps and Legends examines the solo careers of Peter Buck, Mike Mills, and Michael Stipe, and attempts to place their solo work in the context of their work with R.E.M.

My book is live on the Apple Books store now. However, I have been told there may be a delay of up to 24 hours before the store’s search engine database is updated to allow people to search for it. In the meantime, if you live in the United States, United Kingdom, France, or Germany, you should be able to view the book by clicking on the following direct link: 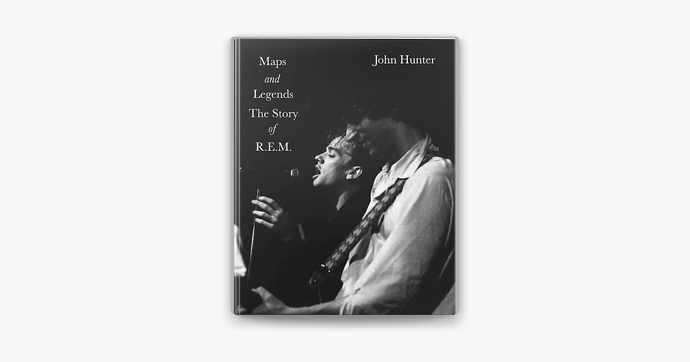 If I sell enough copies on Apple Books, I will use the proceeds to publish a physical trade paperback edition as quickly as possible. Please note that Apple Books allows you to download a free sample of roughly the first 60 pages of the book, which allows you to check out the chapters covering the childhoods of Peter Buck and Michael Stipe in full, as well as part of the chapter covering the childhoods of Mike Mills and Bill Berry in Macon, Georgia.

I’ll shut up now. Again, I would like to say thank you to Ethan for graciously allowing me to mention this book here. While I will not spam the forum with further posts promoting this book, if anyone has any questions about the book, I will do my best to answer them in this thread. Thank you, Ethan.

Many many congratulations, John! The world shall know more and more about R.E.M. – and if you ever need a Brazilian translator to make this the first book in Portuguese on R.E.M. (that I know of), I’m your man.

Technically speaking… technically… there is some material published in Portuguese in book form. But it’s not quite a book and more like one of those discographies with a bit of bio in the beginning. And, AFAIK, it was published in European Portuguese. So you can still be the first in Brazilian Portuguese, if you can make it happen.

There has been a biography in French - Remember Every Moment - and, as I noted in another thread on this forum, Birgit Fuss of Rolling Stone Germany has a biography in German coming out in 2023.

I see you also found Ethan.

Congrats on accomplishing such an ambitious goal! Odds are excellent I will purchase!

Thank you so much.

Hope you sell enough copies and be able to publish It phisically. I’ll be the first to buy It.
My most sincere congratulations

Thanks for the kind words. I’m working on that now, i.e., getting a physical book printed. hope it will happen in the first half of 2023.