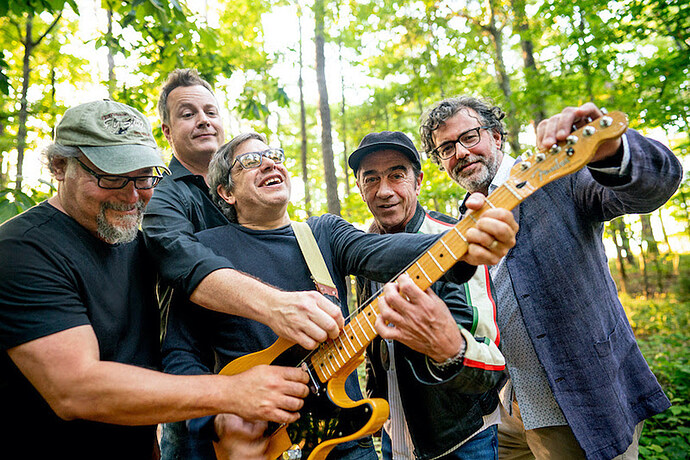 Led by former Five Eight frontman Mike Manitone, The Bad Ends is Bill Berry’s first band in 20 years. Their debut album is out in January.

I look forward to hearing it!

That has to be the last thing I thought I would ever hear!!! Wow I am floored

I love Bill. Please be true…

I just listened a few hours ago and it was a good song, but seeing Bill I was to focused on him, honestly!!! I Love Bill

I’m wondering if Bill is doing more than just drumming on this.
also wondering if we’ll ever get to hear some solo stuff from him…

I’m so glad he’s back

Catchy. Hope to hear some of his acoustic stuff!

Bill said in the Athens podcast he did at the beginning of the pandemic that he regretted being away from music for so long and that he intended to get back in the game. I’m happy that he’s finally back…and naturally I dream that it will lead to a full-blown R.E.M. reunion.

I wish people would just be happy that Bill is back in a band on somewhat of a full time basis instead of seeing it as a means to an end for a R.E.M. reunion. I love them and miss them as much as the next person but that ship sailed in 2011.

You are right, and the ship is indeed sailed. but that said - It’s becoming more and more clear to me that the members of the band NEED the band to create properly. I’ve been hearing murmurings about a Mike solo album or some Bill solo material for the better part of a decade now, not to mention Michael - who promises solo material for 3 years, but for some reason we barely get to hear it (fingers crossed that it will change soon… )
the only real productive member is, of course, Peter. but his projects seem to interest only the most hardcore fans (myself included). I’m not saying that they made a mistake disbanding, but maybe another REM album (with all 4 of them) before retiring is something that they should consider…

Naturally I’m happy for Bill, who has come to be my favorite member of the group. I’ve always been taken with his one-off Thirteen One Eleven release and wished that the band had taken up that direction and made a straight-up country album. So I find his return to music very exciting.

I chose the word “dream” for a reason: it’s a fantasy.

Stipe has said on more than one occasion that there’s zero chance of a reunion, including on the 10th anniversary of their disbanding last year. I don’t get the impression that any of them have any interest in reconvening R.E.M. for any reason: album, tour or otherwise. From what I can tell, they seem to be perfectly content with their individual pursuits. Stipe initially said he was only going to release singles. Within the past year or so, there was word that a solo album was coming but that has yet to materialize. I’ve heard no mention of a Mills album aside from him mentioning that if he ever did release one, it would be called “Mike Mills and the Mike Mills Experience.” I always took that to be more tongue-in-cheek than anything. He seems to be content with the various projects he’s been involved with: the Baseball Project, the Concerto thing, Big Star’s Third shows, etc. I’ve never heard any mention of a Bill Berry solo album. If and when they ever decide to reunite as R.E.M., that ball is in their court but so far, they’ve remained adamant about there not being any sort of reunion.

Back to the topic at hand. I love this song and eagerly await the album it comes from.

Until someone assumes room temperature, it would not surprise me if REM plays together again. I’m not expecting a reunion album or tour, but I could certainly see them getting together for a concert or recording of interest.

I don’t rule out them playing together again at some point nor am opposed to it but it’s also not something I’m clamoring for. Nor do I feel that they owe me or anyone a reunion, final tour, an album, etc. They were around for 31 years and have more than earned the right to spend their remaining years on the planet however they so choose.

I totally agree but ill eat my hat if the second part ever happens. But it would be sooo great.

I just realized yesterday…this song dropped almost 25 years to the day when Bill told the band he wanted to quit (October 1997).

Some more details on the band: https://www.thebadends.com/about

By chance, Mike ran into R.E.M. co-founder, Rock and Roll Hall of Fame® Inductee, and legendary drummer Bill Berry. Now, Bill hadn’t played drums in a band full-time since leaving R.E.M. in 1997. Save for the rare special reunion or one-off, Bill was “retired,” as he puts it.

Nevertheless, Mike sent him a video, and Bill wound up in the jam room, practicing with the guys. After one particularly fruitful session, Bill simply proclaimed, “I’m in a band again.”

“I was so grateful to be able to record the album with my friends,” Mike smiles. “I’m a bit of a fan boy and pretty much so is everyone else in the band. One of the crazy things is to be in a room with Bill, watch him work, and hear stories about the albums that defined everything I know and love about music. I will never forget how excited I was on the first day of recording.”

Anybody attended the Bad Ends show yesterday in Athens?