What’s your most prized R.E.M. possession?

I’m asking this, whilst completely unsure what mine is. I have a lyric sheet for The One I Love that Michael Stipe threw into the crowd at Stirling Castle in 1999. It’s probably that.

I also have a giant Monster banner that used to hang from the ceiling of a Woolworths store before my sister snaffled it for me. I like that too.

Maybe it’s a memory? I shook Michael Stipe’s hand in Southampton in 2008. (Me, and lots of others!) I met Peter Buck after a Venus 3 gig in Glasgow once.

And I’m lucky enough to have some of the harder to get vinyls. Unplugged from RSD, Live at the Olympia, and all the albums apart from Around the Sun.

There’s a lot I don’t have. The fan club stuff (still not really sure why I never joined), the Hib-Tone Radio Free Europe, the lunchbox etc.

I’m not really a completist. I like having things, but I like them to mean something. The lyric sheet and the Monster banner mean something to me. I’d probably rather have those than the Hib-Tone, for example. I was 3 when that came out…

My memories of listening to them, seeing them in concert, and the anticipation of tours, new albums and receiving mailings from the fan club. Material possessions would include a first pressing of “Radio Free Europe” and all of the fan club singles/mailings between the first single in 1988 and the last in 2011.

I don’t have that much, tbh. Maybe my most cherished R.E.M. thing is The Automatic Box, because when I became a fan in the 90s, it was one of those very mysterious things only released in one country and you would never, ever have something like that in Brazil… and then I managed to get one.

A photo of my dog licking Mike’s face is right up there for me.

This is magic to me. She’s my mom and truly loves R.E.M.

I met Mike and Peter after a Baseball Project show. Got them both to sign my AFTP 25th set. So that’s probably mine.

The special edition of UP wrapped in a box with the spiral bound notepad. Up is my fav R.E.M. record.
Also the original master recording of Document on vinyl.

All the Joy and memories this band has given me, the 7 times I got to see them perform, all the CDs, DVDs,T-Shirts, posters, programs, Box Sets and Fan Club Mailings I received. And of course all the Beautiful music they created, it’s all very valuable to me.

The one with them standing in the field? 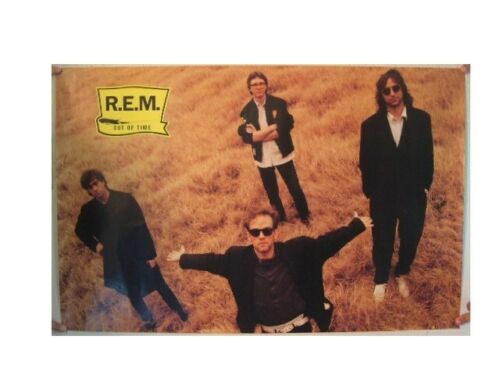 I had that in my dorm room too. (21 years ago.) Don’t remember what happened to it.

I do still have the Out of Time portfolio special edition with the postcards and the woodgrain CD. R.E.M. – Out Of Time (1991, Portfolio, CD) - Discogs

Back when Murmurs first started getting big, in 2001, and before the trestle stuff, the band was recording in Miami. Bertis called and asked for my address, saying that he had something from Michael to send me.

It turned out to be a letterhead from Hit Factory Criteria. Scrawled on it was “To believe in me” and at the bottom, “For Ethan, xo Michael”

I have no idea why he sent it, he has no recollection either.

There’s tons of other things that are more sentimental and personal, but that one was very Michael.

I have that too. And the wooden Automatic set. I have no idea where I got those in the early 90s. It wasn’t ebay! And I’m pretty sure it wasn’t Woolworths, either! Possibly mail order from the back of a music magazine. Don’t know.

I met Peter Buck after a Venus 3 gig. I had my wee sister with me and took a photo of her with him. He signed a copy of Green that she’d brought along. We were rushing to get a last train home, so it was very quick. (I’m pretty sure he was also really disappointed that we had to rush off…)

I’ve always regretted not having my photo taken with him too. For probably the only time in my life, I was a little starstruck.

My favourite too. I also have that special edition. I’m beyond excited about next year’s 25th anniversary. (25 years, though. How did that happen?!)

I remember seeing this tweet! And thinking that your Mum must be a pretty cool lady!

I don’t have the Automatic box. It’s like a mythical thing! I have the Green one though. Picked up a sealed copy a few years ago for a surprisingly good price. I haven’t opened it yet. I’m torn between the Peter Buck theory, that records are meant to be played, and knowing that I have all the music digitally. It seems a shame to open it.

I do have a bunch of concert memorabilia, like set lists, Mike’s pick, etc. However it made my life to have Peter mention my Maps & Legends tattoo in the liner notes of the Olympia cd. I had been to a bunch of shows on tour but in fact had never been to any of the Olympia shows as it indicated in the notes. Later on when I saw him at a Bumbershoot show he told me to look out for the mention in the notes. When I told him I wasn’t at any of those shows he said something along the lines of after all the shows they did, it was all kind of a blur and it was too late to go back and edit it now. Then later on after the album was released, during a record store day in Seattle, I got to see him & thank him for the mention. I mean shit, I’ll never get over that, mis-memory or not.