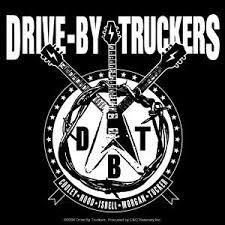 Any love for the DBT and their progeny Jason Isbell on here? Lots of similarities as well as differences. Both based out of Athens originally, liberal bastions in the dirty south, sound evolved over the years. I know Patterson Hood of DBT loves REM. Seems like he has been in touch with Mike Mills, especially since Hood moved to Portland.

Favorite DBT album? Mine still the Dirty South but they have had a lot of good albums, songs and tours since.

I’m a long time fan, getting into them around the time of Gangstabilly and Pizza Deliverance. I’d heard an acoustic version of “Nine Bullets” on a compilation of local (NC) and regional artists prior to that in 1997. I liked it but it’s not what set the hook. That happened about a year after I first went online and joined the Raleigh, NC based Guitartown email list in 1999 where the Truckers were among the artists that were all the rage. Not long afterwards I saw them perform for the first time an an in store at Waterloo Records during SXSW in Austin in 2001. I’m not sure how often I’ve seen them in concert since then. Gangstabilly remains my favorite of all their albums based mainly on the point of entry theory but also because of Neff’s pedal steel. There’s also a rawness to that record that I love.
I also like Jason Isbell but often find his sound a bit too polished. Unlike the Truckers, his live shows also seem to play it a bit too safe. However, if you’re only catching him once per album that’s not so much an issue. I greatly admire how he and Amanda have also been outspoken about supporting female artists. Same for Jason for putting the Country music establishment on the spot when it comes to discrimination against African American in the industry.

Most seem to recommend Decoration Day. I’d suggest the live set It’s Great to Be Alive for more of an overview and a more accurate summation of what the current line up sounds like. That said, there are no Isbell songs. Many also consider the era that he was with the band (2001 to 2007) to be their peak. I respectfully disagree, though those albums (Decoration Day, The Dirty South, and A Blessing And A Curse) are certainly essential listening. The later is a bit controversial as you can hear that Isbell is starting to go off in a different direction. The exception are a couple cuts that didn’t make the album, “Til the Well Runs Dry” and “TVA.”

I would add the immediate post Isbell album Brighter than Creations Dark. Their first album which was widely heard despite being released on 9 11 01, Southern Rock Opera is considered by many to be their best. They do have a compilation album which is pretty good. I suggest their b sides album inspired by Dead Letter Office, The Fine Print, their last album with New West. The New OK from 2021 is good too.

Patterson Hood has some good solo albums too. Murdering Oscar is my favorite but Killers and Stars is a good demos album and Heat Lightning is a cool concept album. I saw him play most of the songs live at Standard Deluxe in Waverly AL.

Cheers both. I’ve got some listening to do!

A beguilingly rich catalogue… quite a few classics too. The Dirty South is my #1 pick but Southern Rock Opera, DD and Brighter than Creation’s Dark all get you started.

“Putin’s on the rise, Ukraine’s under siege…” There is a DBT song for every occasion, even terrible ones.

One of my favorite scenes from The Secret to A Happy Ending. 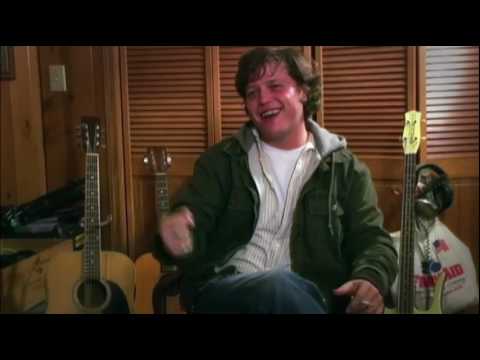 Live from the 40 Watt. Cooley: How do you break up a band? Practice. WWW

Love love love the Truckers and Isbell. If you haven’t, definitely give Isbell’s recent covers album “Georgia Blue” a spin. “Nightswimming” and “Driver 8” both on there, as well as tunes by other Georgia artists.

The most recent tweet from Elizabeth Nelson of The Paranoid Style. In addition to being a musician she has also written for The Ringer, Lawyers, Guns, and Money, The New Yorker, the Oxford-American, and Pitchfork as well as other publications. 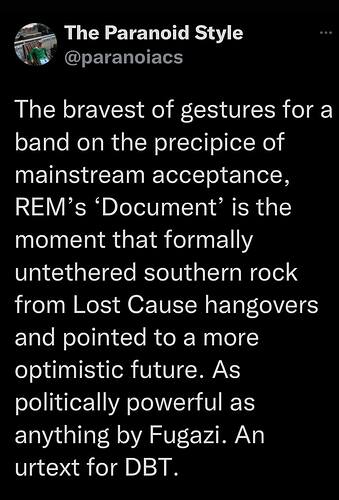 I didn’t get DBT until I did, and then I could not stop. Looking forward to seeing them in Toronto next month.

I first heard them on the 1997 Yep Roc Records compilation Kudzu n’ Hollerin’ Contest (with artwork by Wes Freed) that included an acoustic version of “Nine Bullets.” I liked them well enough but the first albums I purchased by artists featured on that compilation were Throwin’ Rocks at the Moon by the Backsliders, Strangers Almanac by Whiskeytown, and Smelling Salts by Trailer Bride. My interest in Drive-By Truckers wasn’t piqued until I joined the Raleigh, NC based Guitartown email list in 1999 where they were the talk of the town. It was a little unusual for me to fall for their first two albums as I did as prior to that I had never liked anything quite that rough around the edges. Some become sold on the live show but at point I was still a few years away from seeing them in concert for the first time. Even when I did, it was more of a laid back set they did at Waterloo Records during SXSW in 2001. I got the full on rock show shortly after that when they performed during Honky Tonk Arama at the Local 506 in Chapel Hill. 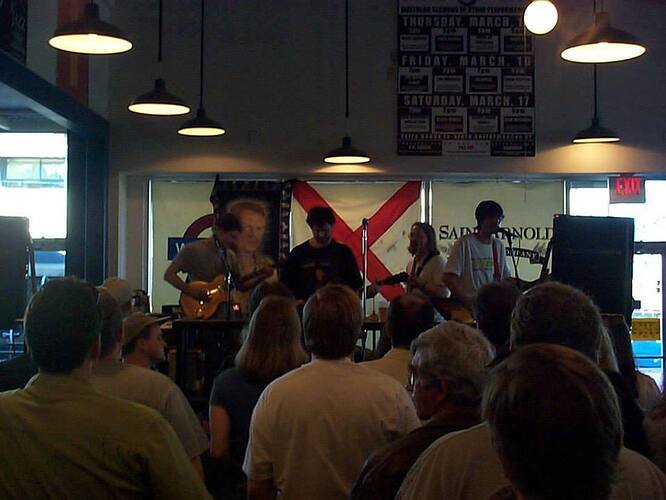 Big fan. Dirty South is perfect. Decoration Day and Brighter are close behind. LOVED Isbell’s Southeastern. Casual fan of his others. Great live band. Seen them at least 10 times.

From this day in 2007. I’m pretty sure the last show I saw with Isbell was in September of 2006 at the Carolina Theatre in Durham, NC. It seemed off that Isbell was playing keys instead of guitar on “Outfit.” Per a post on the Gibson blog, Patterson was not satisfied with the show. It’s no longer online so I can’t double check to see what he had to say about it. However, I can say there was a weird vibe to the Carolina Theatre show. It’s a seated venue so they had ushers trying to keep people out of the aisles. Also, they were not at all prepared for the Truckers crowd as they ran out of beer almost immediately. First, PBR and then everything else they had in stock. That said, I feel fortunate to have seen them with Isbell the number of times I did.
The first show I saw post Isbell also seemed off but in a different way. They were trying to regain their footing and the opener, Patty Hurst Shifter, seemed to upstage them that night. If not upstage, they seemed more on their game than the Truckers. To their credit, I’ve never seen them turn in a bad or underwhelming show during any era of the band but on both of these nights they didn’t seem to be at the top of their game and understandably so.

Jason Isbell Plays Final Show As Member Of Drive-By Truckers On This Date In...

Listen to Jason Isbell’s final performance as a guitarist in Drive-By Truckers that took place on March 31, 2007. 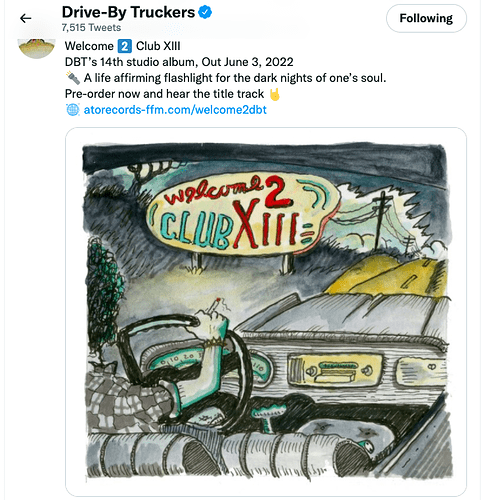