I saw The B-52’s for all three of their Fox Theatre shows here in Atlanta on January 6-8.

Originally, I had purchased the cheap top balcony tickets for the first night, middle-tier balcony for the second night, and then second-to-top balcony for the third night, as the lower level and floor tickets were all too rich for my blood.
On Friday morning, January 6, however, a friend of mine who was unable to attend that night’s show gifted me his two second row seats. I gave the other second row seat to a friend of mine who had recently lost his job and was about to celebrate his 50th birthday, and I gave my original top balcony ticket to another friend who had recently lost his job, paying it forward all around.

Friday night’s show, with the second row seats, was an experience for the ages. Seeing The B-52’s up close and personal like that was truly a treasure.

The Saturday night and Sunday night shows were also wonderful, even from farther back. I still had a great view of everything, because of the layout of the venue.

The B-52’s varied their setlists each night by a couple of tracks, so I was able to see three different shows instead of identical sets all three nights.

Each show opened with a screen intro requesting for the audience to put their phones away and dance. I honored their request and did not take any phone photos during the show, not even from my second row vantage point on the first night.
(I had a lot of fun just dancing and enjoying the performances. I think that I might normalize not taking phone photos at shows from now on.)

My introduction to The B-52’s was the same as my introduction to R.E.M. Back in 1983, a local music video show, Cousin Brucie’s Videos, aired during the summer. My 11 year-old self saw the videos for The B-52’s - “Legal Tender” and R.E.M. - “Radio Free Europe” on that show. The show was also my introduction to Echo and the Bunnymen, INXS, China Crisis, Midnight Oil, Captain Beefheart, Love Tractor, and many many others whose albums I ended up buying in subsequent years. Now, at the time, at my young age, I was more preoccupied with Duran Duran and Michael Jackson, but, like the sponge that I was, I took in every new video and remembered the bands when I saw their cassette tapes in music stores later on.

When I was a freshman in high school in 1986, I was given a blank tape that had the 1979 debut album from The B-52’s on one side. That album floored me…floored me. I was already attuned to new wave/alternative music by that point in my life, but most of that music had the characteristic 1980s production. By contrast, that self-titled first album from The B-52’s sounded as though it had been recorded in a garage, complete with throwaway lyrics that sounded as though they had been written on the fly. (“Somebody went under a dock, and there they saw a rock. It wasn’t a rock. It was a rock lobster!”). I instantly loved all of it. Funny as it seems, that debut album was my gateway drug into the punk rock sound (Sex Pistols, The Clash, Dead Kennedys, etc.) that I got into shortly after.

This is probably blasphemous here on Murmurs, but, in recent years, my love for the debut B-52’s album and The B-52’s legacy has eclipsed even my love for R.E.M.
They basically broke all of the rules of music with their debut in 1979. Their second album, Wild Planet, is just as impactful. Cosmic Thing, from 1989, is a downright perfect album that I enjoy all the more as I grow older.

Funnily enough, I did not get around to seeing The B-52’s in concert until 2019, when they played at Chastain Park here in Atlanta with…(gasp)…OMD and Berlin opening. That show was phenomenal, but these three Fox Theatre shows were even better.

KC and The Sunshine Band opened for The B-52’s for all three of the Fox Theatre shows. This had me scratching my head at first, but it made sense when I saw the performances, because both bands basically put on huge dance parties all around. KC and The Sunshine Band were in amazing form…active, energetic, and cranking out their old disco hits.

The setlists for all three nights… 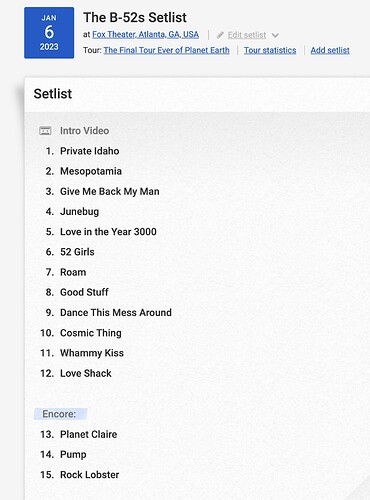 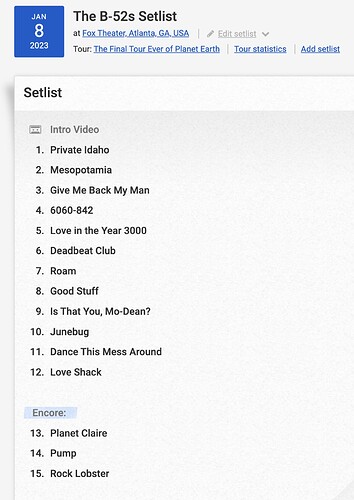