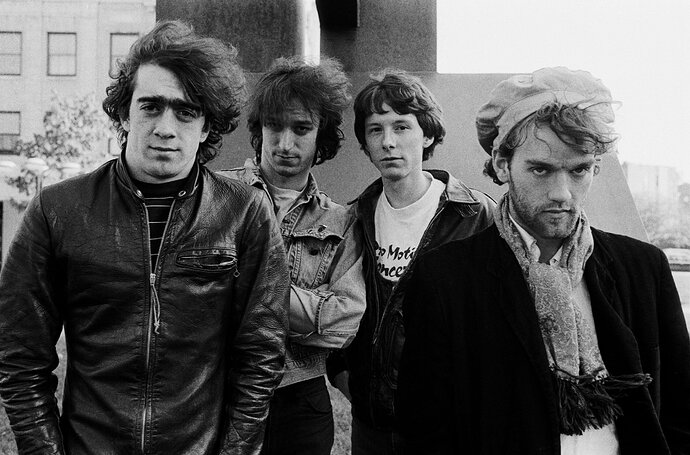 Michael Stipe met Peter Buck in an Athens, Georgia record store in January 1980, and that fortuitous moment spawned one of the defining ‘80s bands. Joined

I have my favorite, and the R.E.M. albums I listen to the most. It’s personal preference really. Document rocks for me right now, tomorrow it might be Monster, depends on how I’m feeling and the atmosphere around me on the day. .

I don’t bother reading these lists anymore. I saw it posted in a FB group I belong to and someone replied, “posers.” When someone countered with why R.E.M. weren’t posers the person fessed up that they simply didn’t like R.E.M. A while back when Mike Cooley of Drive-By Truckers was asked why he doesn’t participate in social media he said, “I’ve been to middle school.” That pretty much sums it up on most days.

Hear hear! I hate rate this rate that. I may mention this or that is in my top 3-5-10 whatever but I will not participate in rank these. Your friends response was brilliant!

My main criticism of the list is that it doesn’t make any compromises. I mean, saying that murmurs is the best, while Around the Sun is the worst, is hardly an earth-shattering conclusion.

There was a member in the old murmurs that kept all the time championing Reveal, (personally I believe that it’s the worst , with Around the Sun being a masterpiece in comparison) but at least I give credit to this member for standing his ground.

Likewise, I’ve seen other members exhalt “Up”, and I can relate to the sentiment as it’s an album of infinite beauty that unveils something new with each listen Could be compared to a fractal that contains infinite, detailed sonic structures at various small scales.

Granted, I can’t pretend that the general public embraces “Up” as a magnus opus (or even New Adventures in Hi Fi) but I think that this pattern of approaching the discography in terms of how true they stay to the “Murmur” or “Reckoning” paradigm so to speak, is biased and tends to offer a stereotyped image of the band.

Did they even listen to the albums?

Seems like clickbait with hopes that people will buy something off Amazon to generate referral revenue.

I don’t think of any of R.E.M.'s album as “best” or “worst” but I do have favorites and least favorites. Just because I have least favorites doesn’t mean I hate or dislike them, it just means I love them the least.

This is exactly how I feel, couldn’t have said it better myself

These lists get so boring and in this format. If someone did decide to stick say Up at No1, there’s no chance they’d be able to justify why in a paragraph or so. It would just be clickbaity, “surprise!”. I’d love to see a long form article by someone though arguing why X album is their best. It wouldn’t need to be a leftfield choice, Automatic or Murmur are fine as I just don’t ever recall an article such as that. Just seen in list form with similar headlines.

As an aside, I vividly remember on Reveals release that much of the UK press at least were claiming it to be an Automatic rival or even beater. That kind of highlights another inescapable problem with music journalism in that its not just ridiculously subjective, but also massively influenced by hype and trends. If you look at modern top 100 lists, there’s way more pop, r&b and rap than you’d see 15 years ago and the likes of Nevermind and Automatic feature much lower than the 90s when they were fresh and rock ruled.

In short, rankings and lists are pretty useless but then i bet we all secretly still flick through them when we see them

To me, when it comes to art there is no “best,” “better,” “greatest,” etc. It’s art, not a sporting event. People often refer to these lists as “clickbait” but publications like Rolling Stone were doing them long before the internet. Yes, they bring a lot of clicks and create debate but I don’t know that they’re clickbait. I always thought clickbait was an article with a deceiving headline that would prompt you to click on the article to read it. Also, some lists are based on radio airplay or sales, not what some writer considers their favorites. Prior to going online in the late 90’s I’d never made any sort of music based list. However, I’d read many lists in publications like Rolling Stone as well as The Book of Rock Lists by Dave Marsh and Kevin Stein. Once I did go online and joined some music based communities, I noticed that lots of members loved ranking albums, songs, concerts, etc. Only then, did I participate. Eventually, I grew tired of it. It seemed new again when FB came along. Then, I tired of it again.
I still haven’t read whatever Rolling Stone’s latest “greatest” list is. If I read any list it’s more apt to be from fellow music nerds but in all honesty, I skip over those the majority of the time as well. As mentioned previously, I do have favorites but as far as ranking albums, songs, etc. I haven’t done that in forever. A few years ago, I made a list of 100 of my favorite albums because I got tired of always having to leave so many of my favorite albums out when doing Top 10, Top 20, etc. lists. Even then, it’s only the first 25 or so albums that are listed in any sort of order. After that, they’re listed at random. Also, as soon as I posted the list I thought of a bunch more albums I should have included. Since posting, several albums have also been released that I feel would be worthy of inclusion but it’s doubtful I’ll ever make such a list again.

They certainly do create debate. I don’t think one’s favorite record is necessarily about having super musical knowledge, it’s more about experiences and how one connects with a record that makes it a favorite.

That’s exactly how I feel about it. In some music communities there’s these people that place an inordinate amount of emphasis on a musician’s technical abilities and somehow relate that to the music’s “greatness” and importance. Some guitarists may know every note on the scale and execute them with unrivaled technical proficiency but that means next to nothing to me as far as how the music itself resonates with me. Fables of the Reconstruction is my favorite album by R.E.M. not because of anyone’s abilities as musicians, songwriters, etc. It’s what the album meant to me as a young man (I was 23 when it was first released) and how it so uniquely captured the feel of the South. It’s about emotion, memories and the feelings the music evokes.
In some music communities I see these long, drawn out discussions that pit the likes of Joe Satriani or Steve Vai against someone like Kurt Cobain where some members favor the former over the latter because of their skills. Kurt Cobain may not have been the most technically skilled guitarist but he was oozing with emotion and feeling. Something about Nirvana obviously resonated with millions of listeners that wasn’t based on their technical skills as musicians. That’s what music and art is about to me. There are people out there that can paint and draw to the point where their work looks like a photograph. That’s cool but I find myself much more moved by works of art that don’t set out to achieve that level of realism.

In all seriousness, this is the perfect topic for this message board.

I have loved every REM album at different times, but I have a rough ranking of albums that go like this.

I think of the IRS years like the first years of sex in a new relationship. Exciting, experimental, intoxicating.

Then comes the deeper levels of meaning and pleasure, but with more responsibility and less pure joy.

And finally, the pleasant comforts of widowed old age and memories.

And by the way, I have never understood how people rag on Reveal. That album is complex and textured beyond.

Spin ceased publication quite some time ago but continues as a website.

I won’t rag on Reveal but it’s my least favorite R.E.M. album.

This is pretty much my ranking as well except Monster breaks the mould as its my 2nd favourite album.

I think most “deep-going” fans separate R.E.M.'s career into those three categories. It’s just… They kinda jump at you like that, not to mention the perfect “5 albums each” coincidence.

That was a nice comparison. I don’t know if I fully agree, but it’s a nice, thoughtful way to think of the three phases. And, yes, perfect for a forum like this one.

I love Reveal. It’s not, say, in my top 5, but it is indeed complex, textured, nuanced and very nicely composed, if very different from the IRS years. As a whole, I rank it higher than Green or Out of Time, for example, which both have “bigger” songs in my mind, but also weaker aspects.

What put you off of Reveal? Was it the lounge vibe?

Funny, about your comment regarding your comparison of Reveal to the I.R.S. years. There’s a guy on FB that swears up and down that “Imitation of Life” would not have been at all out of place on Chronic Town. He’s hearing something in that song that I don’t hear at all. To me, it would stand out like a sore thumb on that record.

As I may have mentioned before, it’s not as though I don’t like Reveal. When I refer to it as my least favorite, that doesn’t mean I don’t love it. I do. I just love it the least of all of their other albums. For me, it would be the languidness which permeates most of the album which I realize is an aspect of it that endears it to other folks. On the “lounge” note. I pick up more on that vibe from their Unplugged 2.0 performance. I like it but prefer the 1991 appearance.

I think “Imitation of life” is kinda the more classic-sounding R.E.M. on Reveal in some ways (not in others), but, like you, I can’t hear any similarities to CT.

I agree about it sounding like older R.E.M. but not I.R.S. era. Another recent “hot take” I saw was someone that said “Daysleeper” was not the outlier on Up that it’s made out to be, that’s it’s more representative of the album as a whole than some of the electronica based tracks. I call bullshit on that as well. This person also tried to make the case that the video for “Suspicion” is not a video at all because it shows the band playing live and doesn’t have a plot, special effects, etc. I believe this person is also off their rocker.