The most significant R.E.M. product in the last 10 years (in my opinion) is REMTV, a 6-DVD package released in 2014 that includes the documentary film R.E.M. by MTV.

The package’s first disc includes the first formal releases of their 1991 and 2001 MTV Unplugged appearances, along with outtakes. When compared together, the distinctions between both eras are profound, from the excellent musicians (shout-out to the great Peter Holsapple!) who perform with them, to the hairstyles, to the music, to Bill Berry and sans-Berry and even to the audience configuration. Both performances are essential “snapshots”, and a poignant moment occurs when 2001 Stipe comments on ‘91 Stipe while that past performance is playing in mute in the background.

The remaining discs contain more gems spanning the years 1983-2008. Some of the footage has been previously released (notably on the IRS years video compilation When the Light is Mine), but most are released here for the first time. It is interesting to note the obvious — that, except for the 2008 footage, the band was broadcast on MTV/VH-1 primarily in 4:3 ratio and standard definition analog video tape. As a consequence of set lists being presented in full, “Losing My Religion” is performed no less than 12 times throughout the full package.

And now it’s time for the first-ever Murmurs.com forum discussion of said package! What were your favorite features of the package? Any shortcomings? And do you think that the documentary told through the lens of MTV’s evolution is the definitive visual bio of the band?

In fact @alexpppyoung who produced the whole thing and directed it is here! It’s a tremendous achievement. I was there when it premiered up with Mike and Michael, which was a thing, let me tell you.

The collection was around $100 locally when first released which was out of my price range so I didn’t purchase it. Also, with current space limitations that are likely going to lead to me parting with all physical media in the near future it’s doubtful that I’ll ever own it.
That said, I did attend a screening of the documentary at Cat’s Cradle in Carrboro, NC a few years ago that I thoroughly enjoyed. Bertis was one of the hosts along with the late Vivian Connell. It was a multi faceted event that also served as a benefit for the Public Justice Foundation. In addition to the screening there was a special appearance from Pop Up Chorus where the audience sings along to a live band. The two songs performed were “Losing My Religion” and “Man on the Moon.” I’ve included a clip of the latter below. Vivian, who goes back to R.E.M.'s early years, was a teacher turned lawyer and activist. She was diagnosed with ALS several years before and passed away a couple years after this event.
As for the documentary, I enjoyed it and it was fun to see in a room full of people, many of which had seen them perform in the area back in the day. I liked that there was no narrator, that the story kind of told itself through the footage. I guess the downside would be the lack of footage from the latter years since MTV and VH1 eventually got away from music and weren’t receiving any sort of coverage on either channel. It’s been a while since I’ve seen it but from what I remember, I don’t think there’s any mention of their decision to disband. Again, likely because it was not covered by either MTV or VH1. I’m not sure if anyone will ever do another documentary but if so, I believe it could be more thorough and detailed in other areas. 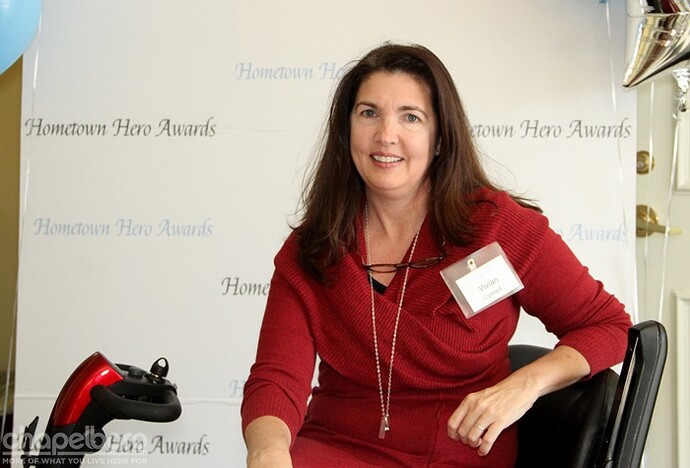 A former Chapel Hill teacher with ALS is honored with a screening of an REM doc. Hi, yes I’m partly responsible for this project and happy to answer any questions about it. Regarding the above:

I go back and watch this a lot, because MTV was my main point of access to R.E.M. as a teen in the Midwest. Unfortunately, for some reason, a good chunk of content is entirely missing from one disc (HOF, Colbert) and I can’t find a way to fix it or replace the DVD. Somebody at Rhino said they’d keep an eye out for any extra copies around the office, but no luck yet.

Alex I don’t think you saw from down on the main floor, but it moved Mike and Michael to tears up in the balcony.

I rewatched R.E.M. by MTV earlier today. One aspect of the band that I feel sometimes gets lost in the shuffle is their sense of humor during interviews - and this goes for all 4 of them (and all 3 from '97 onward), in varying degrees… This to me seems like an essential aspect to their personalities and perhaps a key aspect as to why they lasted so long as a band and as friends, as they have the ability to look at various situations with a smile and a laugh.

I’ll rewatch today. There were many, and like you said I think people miss that they all made each other laugh more than anything (and continue to).

Michael has a good laugh.

I saw the documentary on tv and really liked it, even if the conceit was a little odd.

The whole package was out of my price range at the time, and now seems hard to find. In any case I don’t have a DVD player anymore. Fingers crossed for a digital release.

I’ve seen this complaint posted online before. The menu is two pages long and the button to go to the next is a little small. Just move your cursor down.

I was told about this after we left the theater. Definitely a heavy feeling to know something you did impacted people who have made your life richer (no pun). The whole year or so was very surreal for me.

I’m glad you enjoyed the humor; that was the biggest surprise for me was how funny each of them were in interviews and how rarely that stuff made broadcast.

I sat next to Michael through the whole thing. There was a few “wow, I was hot” comments that became a running joke during the duration of the screening.

But at the end both he and Mike got up and hugged, cried a bit.

Thank you SO much. Watching HOF right now

Thank you SO much. It was never clear that the little triangle didn’t mean play all, it meant next page. I really appreciate you letting me know!

Was not including Mike’s HOF speech cut because of time limits on the DVD? If I remember correctly, only Mike and Michael spoke at the HOF Induction? I would’ve loved to hear what Peter and Bill had to say, but I guess they just chose not to say anything.

From what I remember we only had access to the broadcast edit of the ceremony, so we did not get Mike’s full remarks to pull from. What was included in the program from Mike felt redundant next to Michael’s remarks in the documentary. That’s not to say Mike didn’t say anything great and worth including, we just didn’t have the footage.

Michael also said after seeing the film, and I’m paraphrasing, that the movie was partly about “Michael learning how to talk.” Giving the HOF speech to him alone sort of acts as the climax of that story. This arc was not something we ever articulated in production, it just occurred naturally.

Thanks for answering my question!! I’m going to watch it again.