Okay, this could be a fun thread. Here we go. Currently I’m doing a deep dive into The Smiths and reading about Morrissey. This leads me to the following question: Who was more influential to indie rock? Morrissey/The Smiths or Stipe/R.E.M.

Being a diehard R.E.M. fan, you know where my allegiance lies, but what I found discouraging is that Morrissey’s Wikipedia page just goes ON and ON and ON with accolades, while Stipe’s page is rather short and more itemized based on his projects. I found it discouraging! Am I to believe that Morrissey is more important as a singer/lyricist, but R.E.M. were the more important band?

In my mind Stipe is the bigger icon, but CLEARLY my bias has blinded me….? Maybe it’s a classic case of R.E.M. were more important than The Smiths, but Morrissey was more ‘important’ than Stipe? But how the hell does that make any sense? Thoughts? [And, yeah, yeah, yeah–I know “important” is a relative term, but who cares?] 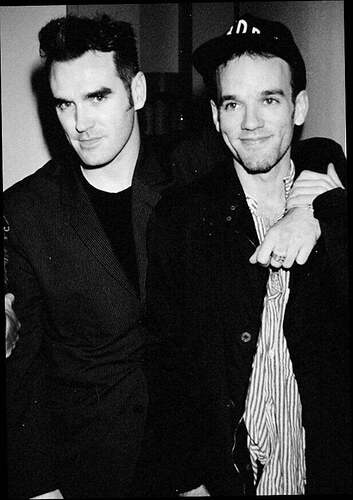 You’re talking influence, not character. I honestly and sincerely believe, from all I’ve read and all the music I’ve listened to and researched, that R.E.M. (not Stipe individually) was leaps and bounds more influential than the Smiths ever were, if you count other bands, genres, songs, lyricists that can be traced back directly to them. Just to name a particular thread I’ve been defending forever: R.E.M. helped create and then influenced the whole indie scenario of the '80s that would later create the Pixies; grunge exploded because of Cobain’s love for both the Pixies and R.E.M.; that made the whole '90s indie scene happen afterward (and bury hair metal), including the popularity of pop-punk in the US and Britpop everywhere. I can’t trace the Smiths influencing Britpop all that decisively in terms of its general acceptance, even though they were a clear influence in style.

Well, Morrissey has a storied solo career, so that will certainly be part of it. There is also much more of a “cult of personality” around him than around Stipe, who has never cultivated this to the extend that Morrissey has (or at all, really).

So, that explains the Wiki disparity, probably. As to who was more “important”, I can’t really say I care too much about all that.

I’d argue that R.E.M. were a bit more influential. I’m a massive fan of both but I think that in particular early R.E.M. really paved the way for the future of alternative and indie music. The Smiths certainly were important too and more mainstream at the time when both bands were active, but Murmur came out a year before The Smiths s/t and the bands that have cited R.E.M. as a major influence are often some of the most important bands in the history of modern music.

Oh that was you…

Repeating what I just said on FB - Morrissey is an insufferable, whiny, bigoted dick and Michael isn’t, so at this stage there’s just no competition.

Pitting artists against each other doesn’t matter one way or another to me.

Oh that was you…

Repeating what I just said on FB - Morrissey is an insufferable, whiny, bigoted dick and Michael isn’t, so at this stage there’s just no competition.

He also supports For Britain, so he’s not just a c@#$, he’s a nationalist c@#$. From an objective point of view, Michael is just a better person.

Yeah–that was me, lol. I feel guilty posting on both threads, but the FB one seems to have more members.

I was casting a wide net, but I didn’t want to exclude murmurs! I did see the “c-word” comment. I’m not fan of Morrissey’s politics, so I hear you. That said, I wasn’t judging them that way–it was more just about the music at this point.

To me, this isn’t even a question. Let’s go to the tape:

This doesn’t even bring into account Morrisey’s behavior in recent years.

As a band, The Smiths were nowhere near as influential as REM. REM were the driving force in bringing alternative music to mainstream radio in the U.S. which is a hugely significant moment in the history of popular music and very much changed the musical order from the 90s onwards. The Smiths influence as a band is modest in comparison.

Individually though, Johnny Marr is easily more influential than any single REM member. You’ll struggle to find a 90s UK guitarist that doesn’t cite him as a major inspiration. In fact, you could consider his playing the spark that lit Britpop, an entire genre. If you check any “Greatest Guitarist” list, Marr will often make top 20 whereas Peter Buck often barley limps in to the top 100.

Obviously these lists are just opinion, but it’s unarguable that Johnny Marr is one of the most influential alternative musicians of all time. Likewise, REM as a band.

Switching viewpoints adds more complexity here… namely the transatlantic divide. Smiths were huge in the UK but they never broke through in the states during their existence. REM didn’t go top ten big in the UK before Out of Time. This correlates well with the underground too, a bucketful of indie bands got their jangle from the Smiths in the 80s.

Marr had his thumbprint on britpop in the 90s but the first Stone Roses album and John Squire even more definitely. Noel felt a more classic rock guy, Coxon called Pete Townsend his biggest influence and Butler was all crunchy glam with his one string leads…

Looking back at it all, there’s more than a few glaringly obvious moments in his discography…say Bengali in Platforms (1988) or We’ll Let You Know and National Front Disco (1992). But as it goes the listeners put it aside as long they get enough kicks.

I mean… At this stage I’m hardly able to enjoy The Smiths anymore (which sucks, I used to love How soon is now) because hearing his voice alone makes me angry but, hey, cool, whatever floats their boat.

Sometimes I get the itch to listen to my Smiths records but then I think of Morrissey and I can’t. It’s a shame, they were a good band. Ah well.