This is probably a long shot but I have exhausted so many resources trying to get anywhere with this. But I can’t think of a better place to reach out about this than murmurs.com

The very first show I ever saw in my life was the Monster tour Cleveland date at the Gund Arena. It is to this day a life highlight. I sat in the nose bleeds but it didn’t matter, I was unbelievably grateful to be there.

The Monster Tour was at a weird point in history where it was relatively pretty recent, the band was huge but it was before smart phones and social media. I would absolutely kill for any kind of media from the show. Pictures are strongly preferred. There is a bootleg floating around the internet of the show but the quality is remarkably bad.

TL:DR does anybody have pictures or any kind of media from the 6/11/95 show? Hell, if not, I would love to even wax nostalgic with people who were there

I was at that show, and Columbus 2 nights earlier.
It’s probably MY bad micro cassette recording that you’re referring to on the internet.

If you can remember back to even just ~10yrs ago… “NO CAMERAS ALLOWED” at tons of shows…
So crazy that it was SUCH a big freaking deal back then and once everyone got cellphones with cameras it just completely faded away and no one cares now.

I took a couple pics before the show, I’ll see if I can find them.

I was wrong. I must have gotten stopped at the door with my camera. Not even any bad “sneak” shots in the arena. Only this one from outside before the show… 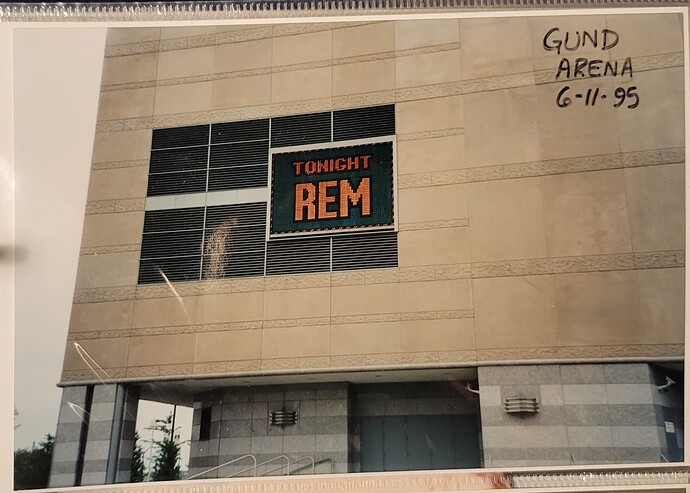 Reminder on my 1999 ticket of NO CAMERAS 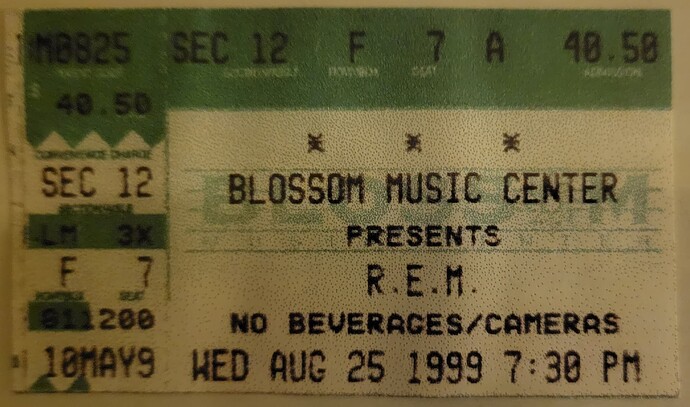 Thanks for sharing! This isn’t a picture of the show but it is really cool seeing the venue in all its 1995 glory from the outside. I remember seeing that “Tonight REM” sign and being excited that the day was finally there.

I really think part of the reason I have struggled so much to get a picture from it is because of the aforementioned “no cameras” rule. Such a dumb rule if you ask me. Nobody was making money off of cheap 35 mm point and shoot pictures.

Additionally, none of the local media that covered the show had photography in the reviews. I tracked down the Plain Dealer, Scene Magazine and a zine’s reviews.

I am confident that my persistence on this will work out in my favor one day. There are pictures of the show out there somewhere, it is just a matter of finding them. 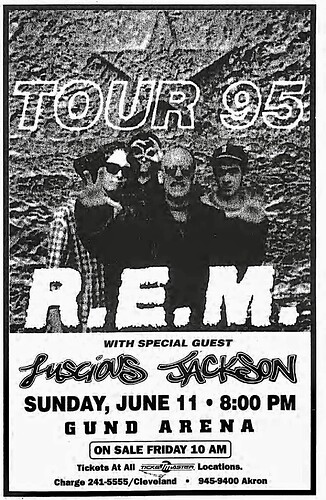 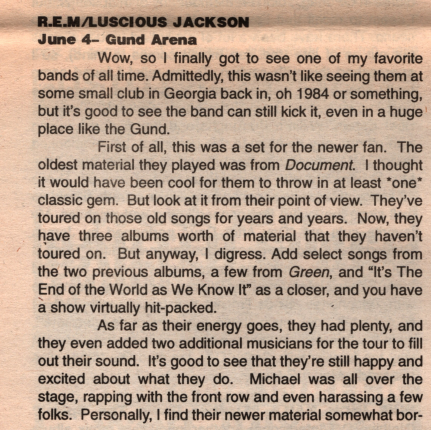 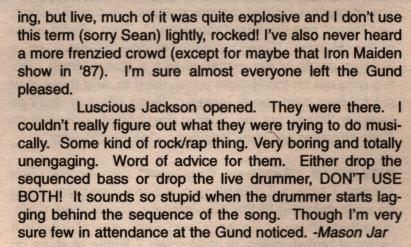 I think one of the reasons for no cameras was because the flashes distracted performers.

But I really liked reading the reviews. Gives me a slight feeling of being there. Being from Cleveland too makes these reviews special but sad. Thanks for posting

The whole thing about cameras back then was the 2or3 professionals and the bands thought everyone was out there selling the photos, when 99.9% just wanted memories of their fun night with a fave band. I used to stick it in my pants. Once with my 35mm I had a big long lens over my shoulder with the body down my pants so when they stopped me to ask what was in the lens case and I said a lens. Do you have a camera? I said no. He let me right in (I may have said it was too expensive to leave in the car) but the beauty of it is once you got past the door people, inside nobody cares! I screwed on my lens and just shot a ton of pics! Bouncers security nobody said a word! I did that many times

My first “Official” R.E.M. Concert was on August 10th (?) or 11th (?) 1999 at the Greek Theatre in Los Angeles. I think the No Cameras Rule was still in effect, but I did manage to sneak in one of those disposable Kodak Cameras, and was able to take a few shots from the 2nd row in the pit. Most of them were too blurry, but I know I got at least 1 or 2 semi-decent shots of Michael and Peter. I held onto those pictures for a few years, but eventually threw them out because I didn’t think they were worth keeping. Had I known social media was in the near future, I’d have saved them and shared them here.

Some artists have very strict rules about taking photos or video at their shows these days. Some even require that cellphones be kept in a lockbox during the show. 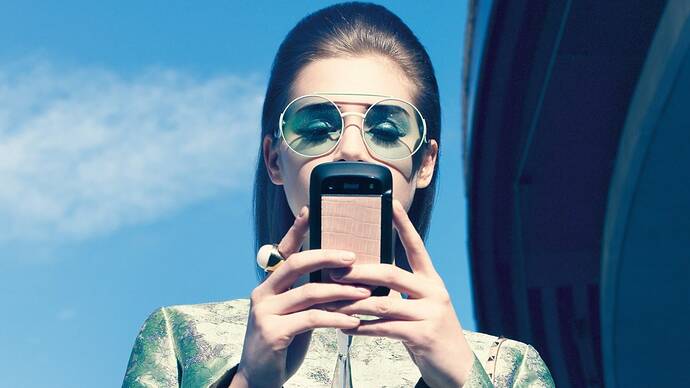 If You Can't Stop Looking at Your Phone, Here's Something That Might Help

Some venues and performers are providing a new service that locks up your phone—and it's heavenly.

I remember Near Wild Heaven as being a real treat from this show.

That and Half a World Away. It was truly a special night that I think about all the time. I’ve seen countless shows but this one is most memorable

yeah too bad but how could anyone have known…