According to the announcement, which can be viewed here (in Portuguese) the entire album is to be played live, with Nando accompanied by his Seattle guests and other local musicians. 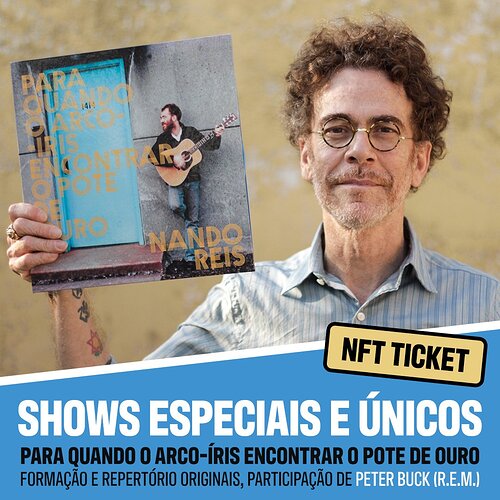 Oh, man! I so wish Sandi was still on board with this tour’s entourage! That’s how I got to meet her back in about 2006 or so, and my brother and I watched Nando’s show from the stage, right beside the musicians. I’ll never forget that.

A video with Nando Reiss, "The most special mini tour I’ve done" has appeared on youtube.
Contains live performance of Nando & friends.

“I spent the last few weeks immersed in the album “Para Quando o Arco-Íris Find the Pot of Gold” in the studio with my friends Barret Martin, Walter Villaça, Alex Veley, Fernando Nunes and Peter Buck (R.E.M.) Last Thursday we premiered the show at Blue Note, and today’s visit to Porto Alegre will be both at Bar Opinião and in the metaverse!” (Assisted with google translate) To make a long story short: Nando Reis is celebrating his 2000 album “For when the rainbow meets the pot of gold” with a remix of the original tracks and a mini-tour. By chance, Barrett Martin and Peter Buck, who actually participated in that album originally, were already coming to Brazil, so Nando called them up to participate in this mini-tour. Stars aligned – so much so that both American musicians will be participating heavily as well in the next Nando album, to be released in 2023. So we can expect some Peter Buck for next year.

On a side note: it’s crazy to see Peter Buck playing “All Star” in the video above (the title being a reference to Converse sneakers). That song got some airplay in Brazil in the early 2000s and I know it well, but in the album he didn’t play in it originally. I guess live he’s participating in all songs, maybe.

To those asking: in the original album, Peter played in two songs: “Dessa vez” (“this time”), and “Frases mais azuis” ('bluer sentences").

I’m curious, how difficult is it to find Nando’s albums in Brazil’s stores, say Lojas Americanas or Fnac do they carry those CDs? I mean the 2000 album plus that he recently did (Jardim-Pomar which also featured Peter Buck if I’m not mistaken) can you find them in stores without much trouble?

I wouldn’t know about the availability of his albums in particular because I never looked, but it’s been increasingly hard to find any CDs in physical stores in Brazil. Lojas Americanas used to have big dedicated sections for them and DVDs, but those pretty much vanished in the last, say 5-3 years. There are still some small stores scattered or small sections in some department stores where you can mostly find garbage.

If I were trying to find Nando’s albums, I would go online first and foremost. From what I’m seeing here, Americanas.com has some of his CDs. Also, submarino.com.br . I can see some at mercadolivre.com.br as well, but you’ll have to do some research there for titles and prices. I would recommend Saraiva and Amazon Brazil too, but they seem to be mostly out of his albums.

A Google search in Portuguese for where to buy CDs these days returns some of those smaller stores around the country. I don’t know this one firsthand, but http://www.locomotivadiscos.com.br/ has great prices.

Another video with Nando Reis and friends - The songs you might not know from “Para Quando”, plus a live performance.

“Despite being desired, the success of the songs does not guide my creation - and it never did. Revisiting the repertoire of “For When the Rainbow Finds the Pot of Gold”, I found and played live for the first time songs that perhaps sound almost new to a large part of my audience. Today I bring them here to the channel, telling a little bit of the story that led to them and the reasons why they are special to me.”(Google translated)