Has Murmurs Run Its Course?

The Decemberists are ancient history as well: I suspect their frontman is my age, i.e., mid-50s, i.e. a first-generation R.E.M. fan. My point is not just that Horsegirl got members of Sonic Youth to play on their album, it’s that they clearly revere Sonic Youth in a way that they do not revere R.E.M. When I was a teenager, R.E.M. were the Beatles of the scene: since R.E.M. broke up, however, bands such as Sonic Youth and the Pixies are winning the long game over R.E.M. I don’t take any pleasure in that, but that’s reality as I see it. But keep defending R.E.M.’s honor and making up reasons why their appeal is as great as it ever was.

Again, definitely not up and coming but the Black Crow’s brought out Peter Buck and Soundgarden’s Kim Thayil a few weeks back for an encore “One I Love” and “Rock and Roll”. There’s obviously still a good level of “Peter Buck’s in town, gotta try and make something happen”. In terms of the chat above, Black Crows will have Peter’s mobile. An up and coming band would have very little chance without introductions or bumping into him.

Did you know that Sonic Youth get 1.9m average listeners on Spotify and Pixies 6m?

4 of R.E.M.’s top 5 songs on Spotify are from the 90s, and Losing My Religion has nearly triple the plays of the number two song. Their 80s work is not what’s fueling those streaming numbers.

You seem to have missed the part where I said the Decemberists aren’t an up and coming band.

Where’s the reverence and collaborations with young female artists and Bjork, Tori Amos and PJ Harvey?

What about Blur (that guy from the Gorrilaz?), Pulp, U2, Smashing Pumpkins, Cranberries, Belly, Throwing Muses, Wire, Gang of Four, Springsteen, Led Zeppelin, Hendrix? I don’t hear any young people or young bands citing them, but that’s just me. I’m sure there are.

I don’t know, it just seems you’re frustrated because you don’t feel they’re cool enough anymore, but they weren’t particularly cool for most of their final decade anyway. Like I stated at the start, I’ve felt anecdotally that they’re seen as cooler now certainly than their final years.

As I noted above, I basically agree with “MasteroftheMuffs” point that, for casual young listeners today, R.E.M. are the dad rock band of “Losing My Religion” and “Everybody Hurts,” and the Spotify numbers bear that out - those are, by far, their two most popular songs on Spotify. I also agree with him or her that most people who know R.E.M. by those two songs don’t really appear motivated to check out the band’s 80s catalog, which, at one point, I would have expected to inspire the next generation of indie/rock bands in the same way that the Velvet Underground inspired R.E.M.

In 1980, I’m sure Led Zeppelin were outselling the Velvet Underground 50 to 1, yet the Velvets, not Led Zeppelin, inspired R.E.M. But I don’t really see Reckoning and Fables inspiring current bands in the same way that the Velvet Underground’s third album inspired R.E.M. Pointing out that the Decemberists and the Black Crowes, both decades-old bands well past their peak, are friends with Peter Buck only proves the point that it’s been a while since a new band was meaningfully inspired by R.E.M.

Aside from the valid, in my opinion, point that R.E.M.’s huge mainstream 90s hits have overshadowed their earlier work in the minds of the general public/casual fan, I’d also argue that one reason for R.E.M.’s decline in mindshare among contemporary indie fans is that the synth/guitar battle of the 80s, for which R.E.M. was proudly on the side of “real,” i.e., guitar, music, is over, and the “real music” side lost. I know a lot more younger people, people in their 20s and 30s, who are into Joy Division, New Order, Depeche Mode, etc. than they are into 80s R.E.M. Whatever stigma synth music may have had in the 80s is completely gone, and the synth/electronic sound of that era is perceived as cool today, and hip reference point to drop, more so than jangly Rickenbackers.

I never tried to make the case that the Decemberists are a newer band that was influenced by R.E.M. In fact, what I said was that they’re far from an up and coming band. I’m not sure how that was misinterpreted.

R.E.M.’s decline in mindshare among contemporary indie fans is that the synth/guitar battle of the 80s, for which R.E.M. was proudly on the side of “real,” i.e., guitar, music, is over, and the “real music” side lost. I know a lot more younger people, people in their 20s and 30s, who are into Joy Division, New Order, Depeche Mode, etc. than they are into 80s R.E.M. Whatever stigma synth music may have had in the 80s is completely gone, and the synth/electronic sound of that era is perceived as cool today, and hip reference point to drop, more so than jangly Rickenbackers.

That’s fashion isn’t? Comes in, then goes out, and comes back a decade later, reinvented in some way. I consider synth to be real music, and I don’t believe it had a stigma in the "80s. By the way, synths roll with Rickenenbackers.
Going back to the original topic, the “real” topic, I don’t know if murmurs would be more active if younger people came here, maybe, they’re going to grow older too.

That streaming list is very interesting. I noted the relatively large number of Spotify streams for the first songs on album, relative to other songs on the album, and relative to YouTube. I wonder if that is from people selecting an album to stream, then giving up before the next song plays? Whereas YouTube might be more along the line of people directly searching for a song (and I suspect the biggest Spotify hits are dominated by playlists and recommendations)?

I love that it’s missing the penis. Did you know that the cover baby, now a grown man filed a lawsuit for being sexually exploited without his consent (durrrr)? He lost the case, but is appealing. What a jerk.

I don’t know if it had a stigma but I was not a fan of a lot of the synth heavy music back in the 80’s, nor am I now. To me, one of things that made R.E.M. stand out so much back then was that they weren’t one of the synth/drum machine driven artists. As for the young person thing, there was at least one here when Murmurs relaunched that took part in a similar topic (R.E.M.'s legacy) but like so many others, she disappeared. 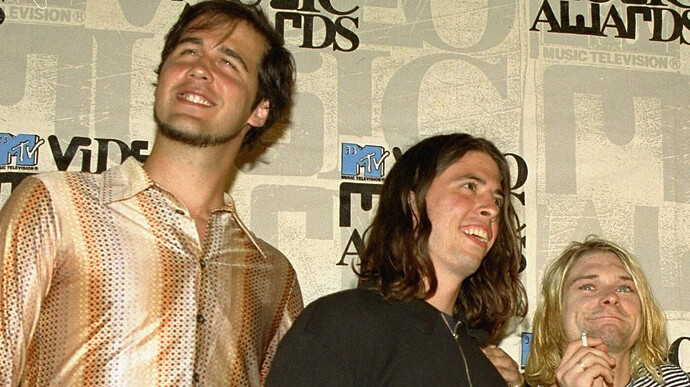 Spencer Elden accuses the band of profiting from "the lascivious nature of his image" in the photo taken when he was a baby. Now 31, he is appealing the judge's dismissal.

Synth music was the thing in the night clubs I went to in the '80s. I also went to see mostly hard rock live bands. And that’s what attracted me to R.E.M. they were different and I ending up loving them. I couldn’t care less if they’re cool now or not, in decline, like platform shoes and baggy pants went into decline, then look what happened.

But we might never have had murmurs1 then! Think how tragic that would have been.

“I consider synth to be real music, and I don’t believe it had a stigma in the ’80s”

*“We don’t look foolish like everyone else who made records in the Eighties, I was in London after Bill got his aneurysm, and the were replaying ‘Live Aid’. I was like, ‘No wonder we weren’t fuckin’ popular – look at these people!’ They all looked like the Jetsons’ house band. Everyone looked like they were getting ready for the atomic age! Everyone had that dumbass guitar sound with the digital delay and that big Phil Collins drum sound and stupid synthesizers. We’re the only ones out of that whole group who can look back without shame.”

Regardless of what you may think about ’80s synth pop, a huge section of R.E.M.’s fanbase - as well as members of the band themselves - were adamantly opposed to it. That’s simply a historical fact.

I think 80s pop including synth pop is just as real as R.E.M.‘s music from the 80s. Yes, I love R.E.M. more, but that doesn’t reduce my love for pop and synth from the 80s. Peter has is opinion, but doesn’t mean R.E.M. die hard fans have to agree with everything he says. One day I like to listen to Up, another day it’s Lifes Rich Pageant. And another time it’s Pet Shop Boys’ Actually or Duran Duran’ Rio. Or Latha Mangeshkar’s Indian film music or Thlahun Gassesse’s ethio jazz from the 70s or Fataumata Diawara from 2010s. Music taste is subjective.

Regardless of what you may think about ’80s synth pop, a huge section of R.E.M.’s fanbase - as well as members of the band themselves - were adamantly opposed to it. That’s simply a historical fact.

Well I wasn’t, and neither was the friends that I was hanging with at the time. I wouldn’t have known who was opposed to it, and couldn’t have cared less anyway.