When, Where, and How did you hear your first R.E.M. song and what was it?

Song: Talk About The Passion
Where: Chicago Area
How: Listening to the radio 93 WXRT
Year: 1984

Extra: I was 13 listening to XRT around 1 AM and switching back and forth from XRT and WVVX the short lived Metal station.

Losing my Religion
2019
At home
My brother said “hey, check out this cool song” and I got hooked.

Song: The One I love
Where: Fullerton, CA
How: Watching in my living room on MTV
Year: 1987, I think the date it was released to MTV actually as I remember the “World Premiere” animation

I have a vague memory of hearing Stand on the radio as a kid in Iowa, but it was probably the 1991 MTV VMAs where I really saw the band and their personalities outside of a video for the first time and things just clicked. I knew this was something that was going to be a part of my life now. I was 11.

I was 11 years old when I saw the music video for “Radio Free Europe” on a local Atlanta-based cable channel music show during the summer of 1983.
I clearly remember that first viewing of the odd video, but I did not actually become a big R.E.M. fan until three years later. In 1983, when I was watching that music video show, I was far more preoccupied with the likes of Duran Duran, INXS, Hall & Oates, and Michael Jackson.

The above-mentioned show was “Cousin Brucie’s Music Videos”, if I remember correctly. It aired all that summer between my fifth grade and sixth grade years. The show was not only my introduction to R.E.M. I also saw Echo and the Bunnymen, Depeche Mode, Captain Beefheart, Tears for Fears, The B-52’s, Kate Bush, China Crisis, Midnight Oil, The Fixx, Peter Gabriel, The Stranglers, and several others.
My 11 year-old self did not rush out and buy albums from these alternative acts on day one, but those early music video viewings planted the seeds in my head, so I gradually became fans of all of the above during my teen years.

That one music video show during the summer of 1983 changed my life.

I heard “Laughing” on WQDR, an AOR station based out of Raleigh, NC sometime in the spring of 1983. I don’t remember any details beyond that other than I was likely driving in my car. I am not sure how many commercial stations were playing R.E.M. at that time on a national level. Not that they weren’t, I’m just saying I’m not sure how many were. It seems at that stage they were still mostly relegated to college radio airplay. I may have even heard “Radio Free Europe” prior to this but if I did, I have no recollection of it. For whatever reason, “Laughing” is the one that stands out. Since QDR was an album rock station it wasn’t unusual to hear a deep album cut. I have also been told by some former employees that one reason R.E.M. was receiving airplay there was due to the local connection with Don Dixon, Mitch Easter and how Raleigh, Carrboro, Chapel Hill, Greenville, Greensboro, Blowing Rock, and Charlotte had been tour stops for them leading up to the release of Murmur. QDR had also been a long time supporter of Arrogance (of which Dixon was a member) as well as other local and regional artists. I’m not sure how long after this that I purchased Murmur but I’m guessing it wasn’t too long. I was 20 years old at the time.

Pretty Persuasion. 8th grade, 1985, on the radio in Home Ec class whilst cooking. Loved it, but when Document released a couple years later it all hit.

Wish I had a more rock n roll anecdote to tell, lol, but

I think it must have been Everybody Hurts (tho I don’t recall where I first heard it) as I recollect hearing it on TV, played over footage of tennis from Wimbledon in '93.

However i’ m sure I had heard it before, so I guess it would have been the prv year but I was prob only dimly aware of a band called R.E.M. in '92

There was this TV show that ran over the summer vacation, where they had the audience vote and rank what videos they wanted to see played on the show. Losing My Religion won first place all summer. At some place they added Shiny Happy People to the list, trying to knock LMR from the first place. It didn’t work, all they managed to do was to set SHP at the second place for the rest of the summer.

I liked it at the time, but didn’t get hooked on R.E.M. till 1994 - following a teenage dramatic heartbreak. 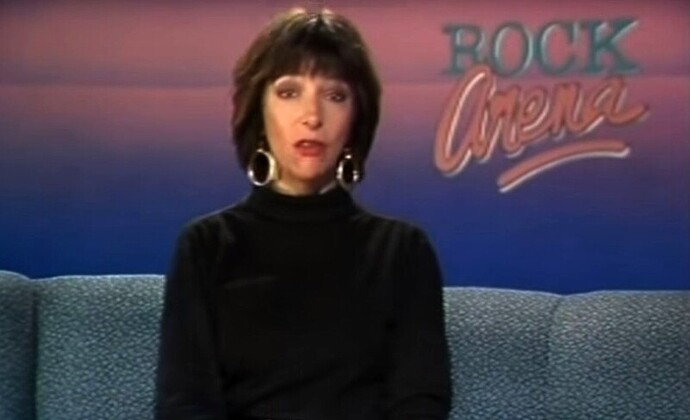 In Australia there was a long running music show on government funded ABC TV station called Rock Arena hosted by Suzanne Dowling. It was on late on a tuesday night and differentiated itself from the top40 hit shows like Countdown by concentrating on the album charts and more eclectic music at the time and playing 2-3 tracks by each artist.

Being a music lover I watched most weeks and one show in I guess late 1987 they talked about the release of Document by a band called R.E.M. and the first thing I sore was the 9 min Document promo video with the dark grainy footage at the podium and the weird movements and text overlays, I was enthralled and then they played clips for ‘The One I Love’ and ‘It’s the End of the World as We Know It (And I Feel Fine)’

Cuyahoga, August 1986, aged almost 14, on a Tuesday night at precisely 00:18h. I was jet lagged to fuck after coming home from spending the summer with family in Vancouver and had the radio on because I wasn’t able to sleep anyway, listening to my favourite everything goes, format free music show (any Germans ancient enough to remember - the WDR Nachtrock). The DJ mentioned this new album from an American band I’d never heard of that had a song on it about a river so polluted it spontaneously caught fire and how the entire album was basically about protecting the environment, generally trying to be a decent person in Reagan’s America etc and that sounded right up my street, so I kept listening. I’ve never looked back since.

Saw “Shiny Happy People” on TV (ca 2000, I was 12); went to look for it in the library but couldn’t remember the song title so borrowed “Eponymous”, because it was advertised as the best-of. Did not find SHP, but from the first seconds of “Radio Free Europe” it was like a whole new world of sound opened up to me.

Song: “Orange Crush”
Where: home, in Belo Horizonte, Brazil
How: Listening to the 107 radio station
Year: about January 1989

That station would play rock in the afternoon and house music at night. I was 14 and listened to both. I didn’t become a fan exactly then, but that, along with “Stand”, PS89", “LMR”, “Drive” and a few others impressed me enough to buy Monster years after, and that’s when I started praying at the altar.

Losing My Religion, in Summer 2021 on Youtube. It was recommended by the platform after listening to Depeche Mode.

Welcome to the party! As you might have noticed by now, we’re all a bit mad here, but in a nice way. Watching them mime to Orange Crush on British tea time institution Top of the Pops in 1989.

I liked the song title and the mad lad dancing like a loon. Thought it was cool and made my dad buy the single on tape. I was 9.

Barely listened to it. It didn’t have the same appeal at that age without the visuals. Forgot about it. Couple of years later I got into a band called REM with Out of Time. The singles were on heavy rotation on a radio station we had on in the car to help distract me from travel sickness. Made my Dad buy me the album and that’s when I got into them.

A short time later I remember running to my Dad to show him something weird. I realised there was another band called REM, the ones with the crazy dancer that played the orange pop song I’d got a couple of years earlier.

It was Losing My Religion.1991 I was 16. I kept telling my best friend I didn’t like it. Though at the time I didn’t like much due to some emotional stuff I was dealing with.
Finally I listened to all of Out of Time, saw Michael with all his tee shirts on the MTV Awards and thought he was the coolest guy I’ve seen. Hooked since obviously.

“The One I Love” in 87(?). I didn’t get it, videos had to have video girls and big hair and spandex, lots of spandex.

Well it was the eighties after all. I suspect I’d have been equally baffled.

There is a girl with big hair in the video isn’t there? And Michael if you squint