At or near the top of my list is this one from this day in 1983 when U2 kicked off the North American leg of the War tour at Kenan Stadium in Chapel Hill, NC. During this time, I was hesitant to travel alone to shows outside of town, especially ones such as this which were several hours away. So, I passed on this one. Eventually, I became ok with it. From all accounts, this was one for the ages with Bono scaling the scaffolding during a thunderstorm to gain access to the roof where he broke into a bit of “Singin’ in the Rain.” I would eventually see U2 in 2009 when they came to Carter Finley Stadium in Raleigh on the 360° tour. While I certainly enjoyed it and was lad to see them at long last I’m also sure it was nothing like seeing the young and hungry U2 of 1983.

Photos by DD Thornton Kenny and Chris Seward (for the News & Observer). Setlist and a recording of U2’s set below. 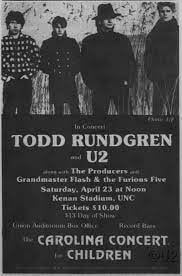 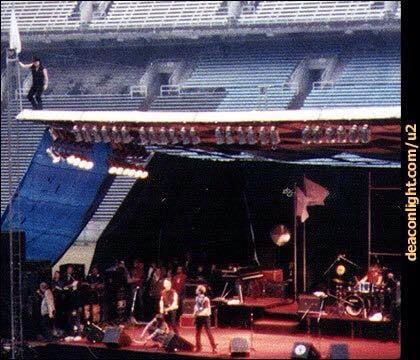 Photo by DD Thornton. Note Bono on the roof. 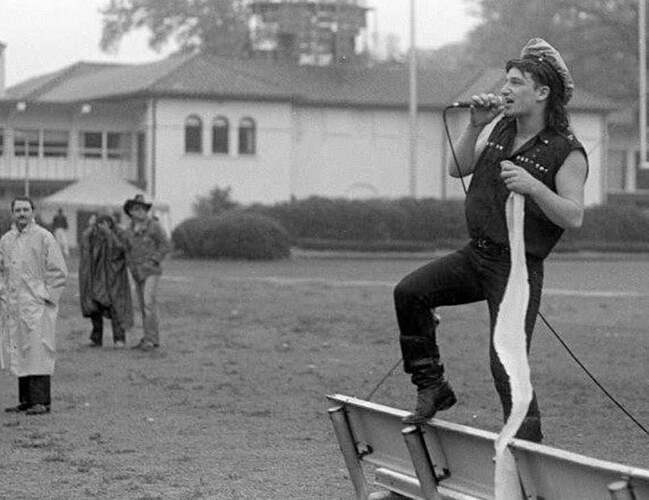 Gloria
I Threw a Brick Through a Window
A Day Without Me
New Year’s Day
Sunday Bloody Sunday
The Cry / The Electric Co. / Send in the Clowns (snippet) / Singin’ In The Rain (snippet)
I Fall Down
October
Tomorrow
11 O’Clock Tick Tock
I Will Follow My R.E.M. concert regret is NOT seeing them on what ended up being their LAST tour…

They didn’t come anywhere close to Cincinnati. I could have drove 5hrs to Chicago, but my son had just been born recently before that, I was really busy with work, and said to myself, “ahhh… I’ll just wait till next time…”

I have three major concert regrets.

When I lived in Glasgow, he did a gig at Oran Mor, 5 minutes away from my flat. (Same venue I saw Luke Haines and Peter Buck at the other week.) I had no idea he was playing. I found out the NEXT DAY! I was pretty bummed out by that.

I’ve told this story on another thread. Glen Campbell was a common musical interest that I had with my Dad. When he did his farewell tour, I thought about asking my Dad if he wanted to go. I didn’t. Don’t really know why. My Dad died a few years later, and Glen Campbell a couple of years after that.

The working rehearsals at the Olympia. My reason for not going was so lame. I didn’t want to go by myself. I’d think nothing of going to a gig by myself now. But my younger self was too self-conscious for that. My loss. I comfort myself by knowing that I saw them 9 times. But those gigs were special.

Not seeing one of the first shows of Wild Flag in a tiny club down the street from me.

Like others, my reason was lame: not going alone.

Missing Sharon Jones & the Dap Kings. I didn’t get tickets in time.

I don’t feel bad for the shows I missed because I didn’t want to go alone. At the time of this one (1983) I was 20. It wasn’t that I felt self conscious about it. I believe it was more that I would have felt safer by having someone with me especially since most shows were 2 or more hours away. I went to club shows all the time by myself back then but they were local.

I’m sure I could think of many more if I put my mind to it but your Jimmy Webb story reminds me of when I somehow allowed myself to forget that Hubert Sumlin was playing close by one night around 2010 or so. By the time I was reminded of it, it was too late to attend. Todd Park Mohr (of Big Head Todd and the Monsters) was also on the bill amongst some other folks.

Missed R.E.M. during the Monster tour here in Montreal. Started being a huge fan a few months after. One of my teachers went to that show, I was jealous.

Dolores O’Riordan cancelled a show in Montreal on my birthday because the Cranberries were reuniting.

The Cranberries cancelled a show in Montreal on my birthday because Dolores was having back problems.

Could have seen the Lemonheads in Montreal in 2009, didn’t go.

Could have seen Collective Soul in St-Ephrem in 2009, didn’t go. Saw them later that year in Montreal though.

Could have seen Sheryl Crow in Montreal in 2019 in Montreal, didn’t go.

Could have seen Weeker in 2019 in Lévis, didn’t go because I went to see Les Trois Accords with the kids on the same evening.

Too many regrets! But I still feel fortunate because I’ve seen many shows in my life so far.

I went to Incubus to go with a friend. They never really appealed to me. I was like ho hum. Then I found out The Duke Spirit opened for them… so…score! I coulda left two hours earlier, but at east the opening act rocked.

During the early 1990s, I had a few chances to see INXS in concert while Michael Hutchence was alive. I always had a final exam or something going on, though, so I missed out.

That is my absolute number one concert regret.

I did see INXS about 10 years ago, with the original band members and JD Fortune handling vocals. It was a marvelous show in its own right, but not the same.

I have been hugely fortunate to see the vast majority of my 1970s/1980s punk/new wave/synth/alternative favs. It vexes me that I did not see Michael Hutchence fronting an INXS show, though.

As I’m sure I’ve mentioned to you in the past I went with some friends all the way to Chapel Hill in 1988 just to see Ziggy Marley and the Melody Makers open for INXS knowing full well beforehand that we would be leaving after Ziggy. While I’m glad I got to see Ziggy, in retrospect it seems silly to have paid for tickets (which were probably around $20 back then) to drive over 3 hours (6 hours total) for roughly 30 minutes of music. As it turns out, the people I was with, who I attended some other concerts with as well, had a thing for leaving early. Not always but sometimes. Speaking just for myself, if pay for concert tickets and drive any considerable distance to attend a concert, I’m staying until the end.

I didn’t go to the first Lollapalooza tour because I had a final to study for and a paper due. The class turned out to be a total blow off.

I wish I had seen Rush more often. I saw them in 2002, which was great. But every time they came around again I put it off, partly because the venue they played near here is notoriously a pain to get to, and also I figured I’d catch them another time, but I never did.

I wish I had seen them more myself. They were one of several bands I was a fan of in the 70’s that I never saw in concert until years laters. All told, I ended up seeing them three times. I feel the same way about several others such as the Grateful Dead (four shows between 1989 and 1995) and Van Halen (one show in 1979 and one show in 2008).

I missed the first Lollapalooza tour as well. That was my last chance to see Siouxsie and the Banshees live.

One of my big concert regrets is missing the Stone Roses when they played the Fillmore in San Francisco in May 1995, when they were touring their second album. I was a huge fan and their first album was one that had been on constant rotation for me. But I was living in a small town in the Sierra Foothills a couple hours away. Not that I hadn’t done the drive before but the show was on a week night and I had work the next day so I decided to pass.

That show turned out to be the band’s final show before they broke up. Guitarist John Squire injured himself in a biking accident while in the area, resulting in the tour ending. Later he left the band and it fell apart. I eventually got to see them when they played Coachella during their 2013 reunion tour and while I enjoyed it I don’t think it was the same.

I have many. I was fortunate to see R.E.M. a bunch of times from 1995-2003 but I missed so many shows. I wish I would’ve caught another Monster tour show. I badly wish I did their small theater tour in 2004. I lived in Columbus at the time and they played a beautiful theater in Cincinnati. I didn’t go because of a stupid college job I had that didn’t matter in the grand scheme of things.

I regret not going to the Vote for Change tour in Cleveland in 2004.

I very much so regret not seeing them in the summer of 2005. I graduated from college and flew to London in mid-June and left for home from Athens in late August. I didn’t have an itinerary, wherever the wind blew me. There were a few times they played where I was or very close to me and I didn’t go. Would’ve been amazing to see them in a European setting

I didn’t realize there was a small theatre tour in 2004. Looking at the R.E.M. Timeline it appears it was a mixture of theatres and much larger venues. I saw them at the Ryman on that tour but the next night I saw them at Gwinnett Arena in Duluth, GA so it doesn’t appear to have been exclusively smaller venues.

The Indianapolis and Cincinnati shows were in fairly small theaters. I was lucky and got to go to both with fan club purchased tickets. The one in Cincinnati at the Taft Theater (opened in 1928) was at the same place they played in 1986. It only has a 2,500 capacity with probably only 1200 on the floor.
It was very close and intimate.
Got to meet Mike, Michael and Peter ALL after the show in the side alley!! So GREAT.
I assumed at the time that is how all future REM shows would be and really looked forward to it.

I don’t know the exact capacity of them but the smallest venues I saw R.E.M. in were Cameron Indoor Stadium in Durham, NC in 86 and 87 and the Ryman.