Due August 19th and long overdue since it’s the only I.R.S. era release not to receive the anniversary treatment. Unlike the other anniversary releases, Chronic Town will be the first to not include any bonus material. Despite what the press release says, it has been released as a standalone CD before but in all fairness it was only available via import as part of a box set called The Originals in 1995 that also included Murmur and Reckoning. That said, I’ll be buying the CD but mainly for Mitch Easter’s liner notes. 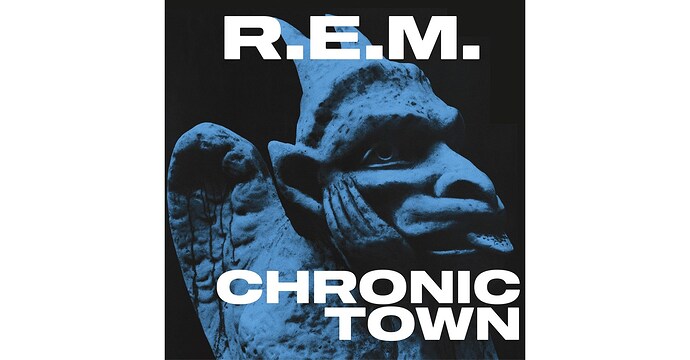 /PRNewswire/ -- Celebrating its 40th anniversary this year, R.E.M.'s debut EP CHRONIC TOWN will be released for the first time ever as a standalone CD with...

Much excitement on receiving an “anniversary release” email from REM and then the subsequent disappointment on discovering that it is just the opportunity to buy an essay about the release and some songs already available, in the same vein as the New Adventures release.

Agreed. And they replaced the cover design of the original release with that ugly white typeface (why?!?). While the cassette player was a cute gimmick for the “cassette set” release to accompany the Hib-Tone anniversary, repeating that gimmick for Chronic Town is pointless and just seems like a cheap product cash-grab. The picture disc is quite nice, though. Still, looking forward to the essay and interviews . . . .

The cassette set replica of an old demo tape was fun and getting a player to play it on was kind of necessary for me! But this time the music on the tape is the same as on the other formats and I definitely don’t need another tape player…

If they remastered the songs, added something like a 20-song bonus CD (that would be incredibly easy to assemble), a big-size t-shirt with the original artwork, a booklet with amazing new liner notes and kept the artwork the same as we’ve loved since forever, then you’d have an exciting release. The way this is arranged now is just beyond disappointing.

Extraordinarily lazy. Doesn’t seem like anyone from the band was involved with this either. Who is the audience for this kind of thing, I wonder…

And surely that picture of the artwork can not be real? Shocking. Someone alert Michael

does anyone know if it will be remastered?

This is utterly disappointing. I really hoped that if there were to be an anniversary set for Chronic Town, we would get some demos/alternate takes because we all know they exist. The bold white typeface on the cover has to be a joke, right? I can’t believe any of the guys had anything to do with this reissue and that’s a shame if it’s true.

That being said, if y’all hear of any events happening around this reissue, post here bc I’ll head there PDQ.

Another disappointing release.
I’ve ordered the skateboard deck, can keep somewhere in my office.

I don’t have the Chronic Town EP. This release I’m going for the picture disc.

The big, bold block lettering on the cover of the reissue is a head scratcher. Maybe I’m in the minority but it greatly detracts from the artwork and stands out like a sore thumb.

As a music fan, ‘Chronic Town’ changed my life. This is a hugely disappointing and extremely lazy effort.

Count me in for the picture disc. The Record Store Day releases from The Cure have shown me that picture discs can sound quite good in this day and age. Besides, I do not own Chronic Town on vinyl in any form or fashion yet.

I really don’t understand it either. It is so clunky. The original lettering and font color was perfect. This seems like a joke.

I would get the CD, but I’m not willing to pay so much postage since I’m in Germany. So if nothing shows up on Amazon, I think I’ll give it a pass.

Just the other day I thought “whats the next anniversary for new merch to pop up in the store?”
I was all excited to see this announcement up until I saw the actual products.
I always wanted to have a copy of Chronic Town since that was the one I was lacking as an individual copy. Only ever had it with Dead Letter Office.

I saw the vinyl was available some years back and had really good reviews but couldn’t find one at a decent price. I’m not too fond of picture discs, so this release isn’t appealing to me. I want the CD but that album art is an eyesore. Takes away the mystique of how the album artwork always was.

The cassette and player would have been nice if I didnt already have the one from the Radio Free Europe anniversary release. That one at least made sense to have as a throwback. This one has a nice blue color to it but the album is also available on other formats. The Radio Free Europe tape was literally just as a cassette.

After the Bombay session, the 1981/82 Drive-In outtakes, 1982 RCA demos, and the professionally recorded 1981/82 live material were not featured on this release, I highly doubt we’ll see any of that material officially released any time soon.