What was the best tour you saw R.E.M. on?

I’m not sure I know mine! I saw every tour from Monster onwards. My favourite albums are Hi-Fi and Up so, from a setlist perspective, the Up tour is, well, Up there.

But I think the Accelerate tour was my favourite. As a live band, it was the best I ever saw them. The energy was something else. They dug out some real chestnuts. I think Stipe was as comfortable as he’d ever been as a front man. He even grabbed my hand during Losing My Religion.*

I was too young to see them pre-Monster. But would’ve loved to have seen them on the Green tour, or during the Out of Time promo acoustic tour.

What was your favourite tour or live memory?

*OK, I grabbed his. Whatever.

I have no idea what the best was but my favorite is when I saw them at Cameron Indoor Stadium on the campus of Duke University in Durham, NC on the Pageantry tour in 1986. Let’s Active opened on what just so happened to be Mitch Easter’s birthday. Though I’d become a fan in 1983 this was my first time seeing them. Not only is it my favorite R.E.M. concert it’s also my favorite concert of all time. It includes a couple of my favorite moments in that at the end of the night Stipe did a swan dive into the crowd. When a couple security guards wrestled him away from the audience, he broke free and free and dove right back into the crowd again. The place was already going nuts but we went completely apeshit when it happened the second time. Years ago, fellow Murmursian Eric Zimmerman (also one of the first R.E.M. fans I ever met online) was kind enough to dig out a cassette he had of this show which he digitized for me. It eventually made its way to Archive.org. If so inclined, you can listen to it here:

A few other favorite moments are when Stipe perched on the edge of the stage at the Dean Dome in Chapel Hill on the Green tour in 1989 to sing an acappella version of “Harper’s” by Hugo Largo. Such a hush fell over the crowd that you could hear a pin drop.

Next would be when they broke out “Camera” for the first time in forever at Walnut Creek in Raleigh in 1999, also the only time I ever saw them on my birthday. There used to be a recording of it on Soundcloud but it’s been taken down.

Another is when Bill Berry came out to sing backing vocals with Mills on “Radio Free Europe” at Walnut Creek in Raleigh in 2003. Then, he jumped behind the drumkit for “Permanent Vacation.” At this point Stipe must have leaped at least a mile in the air. The next day, David Menconi from the News & Observer was looking for photos. I hadn’t had mine developed yet but rushed out at lunch that day to take them to the nearest one hour photo place and then promptly put them in the mail. They showed up in an article he wrote for Mojo about the concert shortly thereafter. 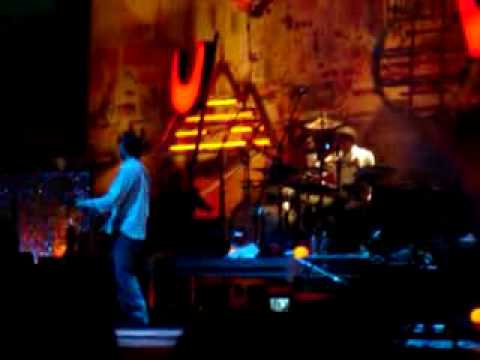 And one more. There were many highlights from the second to last show I saw, which was at Walnut Creek in Raleigh in 2008 including opening with “Harborcoat” and digging deep for “1,000,000” (which I believe is the only time I ever saw them do anything from Chronic Town) but one of my favorites is when they brought out Don Dixon and Mitch Easter for “Sitting Still.” I understand it was somewhere on this tour when they first considered hanging it up but I’m not sure where. The way they pulled out all the stops this night I have to wonder if it was sometime before Raleigh.

Thanks for this. I think it’s fair to say that you saw some special moments! I’m very grateful for the shows I saw (nine in all) but I can’t imagine how I would have reacted to have seen Radio Free Europe, or Camera, or Bill Berry in the noughties, or Mitch Easter and Don Dixon joining them on stage.

12 in all for me. I neglected to mention that I saw some of these shows (2003 and 2008) from the front row which would not have been possible if not for the fan club. BTW, that link for the 1986 show doesn’t appear to be working. If you’d like a link to it please feel free to send me your email address via PM and I’ll be glad to send it to you.

For me it was the Green Tour (you always like your 1st R.E.M. show the best). Rosemont Horizon in Chicago, IL, March of 1989 (I think?). I remember them playing Flowers of Guatemaal and it was incredibly beautiful and powerful for a 13yr old- just beginning to discover the world. Huge shadows of the band cast on the screen behind them.

Of the few I’ve seen (it’ll always be a sore spot that I never got to see them with Bill), 2003 stands out as pure magic.

Like you, Monster tour was my first, (little bit too young for Green and I wasn’t aware of the band til the 90s) so it’ll always be my favourite tour memory…

Around The Sun tour was my first. Had fan club tickets so had front raw seats.