For any of you who aren’t on twitter (ok, so that’s prob nobody but nvm 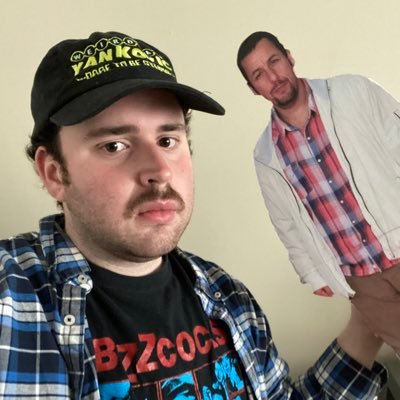 @JoannaNewSum41
(to everyone in the grocery store when “losing my religion comes on) THEIR ALBUMS MURMUR AND FABLES OF THE RECONSTRUCTION ARE REALLY GOOD IF YOU LIKE THIS SONG”
9 Likes
Pelagius42 March 8, 2022, 2:11am #2

I swear I once heard R.E.M.’s recording of Strange at a grocery store about 12 years ago.

I’ve rarely heard them being played in any stores and when i have, it’s usually just MOTM or Everybody Hurts

I def think that grocery shopping would be greatly enhanced by stores playing deep cuts (i don’t shop whilst wearing headphones, idk why, i just don’t )

It’s really just MOTM (a no of times) and ‘Everybody Hurts’ that I’ve heard (but you can’t hear MOTM enough, not as far as I’m concerned, anyway)

EH on in a shop is a bit like -yeah I’m gonna,put the salad potatoes back down now as i need to dry my eyes

I’ve heard “All the way to Reno” in supermarkets (in Brazil!) before. It was probably part of a compilation some of them had then as “ambient music”. I’ll also share a story about the same song from early 2015. I posted this in another forum back then.

“This past weekend, Jan 3rd, I was at my friend’s for some barbecue and drinks and a good time. Let me tell you about the surroundings: she lives in a kind of village enclosed within an urban area, with a somewhat big preserved woods area backing it. It’s a very quiet place. We were sitting in the porch, just looking at the night sky, enjoying the cool night after a scorching day and having a good talk. Her husband went inside and never came back out. My friend Patricia and I are the biggest R.E.M. fans you can ever meet where I live, and she’s the only person to whom I talk about the band, news, lists, preferences and whatnots. And we live in a city where people only know R.E.M. as ‘that Losing My Religion band’ – and that when they even know the name of the song. Sometimes, “Everybody hurts”, sometimes “The one I love”, but they’d be scholars if they knew, say, five other songs. We were just talking about deep stuff, childhood, parents and life’s troubles and, all of a sudden, we both stopped talking… when we heard ‘All The Way to Reno’ coming from beyong the woods at 1:30am. Do you have any idea what it is to have a late non-hit like that playing at 1:30am surrounded by trees and insects just out of the blue like that in a small town in fucking Brazil? We looked at each other in disbelief and couldn’t say much for the next minute or so. She then said it was so surreal, we couldn’t begin to express what it felt like. But it actually felt like someone decided to play that song exactly because they knew two huge R.E.M.-heads would be right on the other side listening. It would have been just another nice talk to my best friend, maybe not an especially memorable one, even, but it turned out to be something neither of us can ever forget. One of those truly weird moments. Also, there were no other songs after that – it played alone.”

Ty for sharing that

Hey, maybe Bill B was on vacation in Brazil and had overheard your conversation

I’ve heard “Superman” at Chili’s and have heard “Radio Free Europe” at Five Guys (burger chain). Someone that’s in the I.R.S. Years only FB group said they jumped off the R.E.M. train when they heard a song from Document in a place of business back in 1987. Apparently, for some reaching the point where an artist’s songs are played in places of business is a dealbreaker.

There used to be a Kroger in Raleigh, NC that played Death Metal.

I’m pretty sure i heard Bandwagon back in '03/'04 at a brewpub-type restaurant in Greensboro, NC

That’s a stupid reason really. It would never ruin a song/band for me, I’d enjoy it a lot. In my favorite mom and pop hardware store, I can always tell when the owner is working. (My kind of music). But I haven’t heard R.E.M. in there yet.

Yep, I don’t understand why people in general seem to be put off by hearing music they like in places of business. It’s also not like it’s something that’s a recent development. I haven’t heard Muzak in years.

We’re the targeted demographic now, we like it, we buy more… Muzak, or elevator music when we were young may have been a good song but a slow annoying instrumental version.

when we heard ‘All The Way to Reno’ coming from beyong the woods at 1:30am.

You didn’t run through the woods to track it down!?!?

I have heard “Superman” in Kroger and a weird, jazzy cover of MOTM in Home Goods this past weekend.