A tale of the early pandemic

So here’s something for Murmurs. January 30, 2020 Michael was appearing on the Colbert Report. I was supposed to be flying to New York to go to the studio with him, capture it for the Drive to the Ocean campaign, etc.

On the way home, the day before I was set to leave, I got a call that my daughter had to be admitted to the hospital for what they thought could be MIS-C, or multi system inflammatory syndrome. Her blood values were weird, and she had a persistent “fever of unknown origin.”

That was terrifying. I cancelled the trip, and called Michael who understood and was concerned. At this point, I knew about a new coronavirus out of China, was worried a bit about it as some people I met in Anaheim at NAMM tested positive upon returning to Korea and China.

Anyhow, my daughter stayed overnight, they did ECG’s and such and never figured it out. Only a few months later did MIS-C end up being an indicator of COVID in kids, and her doctors suspect she had it somehow.

Michael sent me this pic from backstage at Colbert. I’m FINALLY heading back out to New York in a few weeks, two years later. 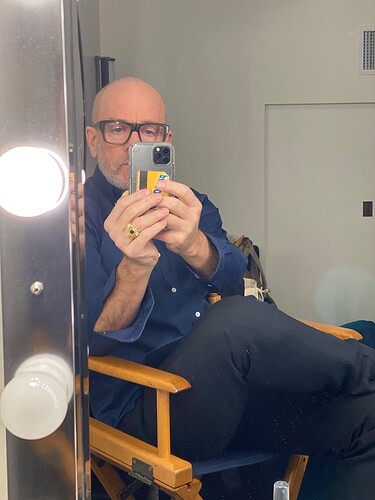 That’s terrifying. I’m glad your daughter is ok. The long lasting effects of Covid are what scare me the most.

She’s good, vaccinated and all OK. It turned out she has Crohn’s and Celiacs though, so that was a bit rough. So far as we know, no one has had it yet, although almost every one of my friends in LA has.

Good to hear that she is ok.
I just got COVID last week. I hope that when viewed from future, it will be a tale of late pandemic.

That is intense. Covid’s scary.
I’m not sure but I think I might have gotten it early in 2020 mostly because the symptoms I had match and whatever I had led to my asthma coming back (at that point I hadn’t had asthma type breathing problems in over 20 years). The asthma has mostly gone away since getting vaccinated. Could just be a coincidence.

I’m so glad to hear your daughter recovered from what was almost certainly one of the first cases of covid, known to me as the plague. I’m only just getting over it. Late to the party, but not late as in underground. I had a very bad go of it. Being triple vaxxed almost certainly saved my life. Your kids are big! I’m a grandma now,to 2 beautiful boys. Both just over a year old.
It’s great to have murmurs back, thank you again. I’m not at all surprised to hear of your success. You rock.

Scary stuff. I had COVID very early on in Feb of 2020 most likely caught at work ( I worked at the airport at the time). It was rough. Struggled to breathe and fought with it for almost a month before getting back to normal. Had COVID again in October 2021 but it was much easier just a loss of taste and smell for a few days and mild malaise.

I am glad that your daughter recovered.
During the summer of 2020, I volunteered to participate as a test subject in Phase II of the Pfizer COVID vaccine trial, so I was able to get a jump on the vaccine before most of the public. Even still, I am constantly vigilant with masking and such these days.

Scary stuff man. Glad she’s ok. My younger brother developed MIS-A after Covid in late 2020. We very nearly lost him. Heroic and distressing measures were taken to save his life. Nurses and doctors and science are incredible.

That is terrifying to have happen. I’m glad she is doing better now.

How scary but glad your daughter is okay I cant imagine the fear. My husband got it in January 2020 he thought he just had a cough he couldn’t shake he now has long Covid and had to take early retirement due to his health being wrecked. We were running for our vaccines as soon as we were offered them as I am very high risk. Scary scary stuff.

That’s really scary. It’s amazing how fast your focus changes when your child is in danger. I’m glad she came through it all right, though I know you and Amy probably aged ten years during the crisis.

Kathleen had pneumonia out of the blue in November 2019, was home sick for a month, and then had another bout of it in January, shortly after she returned to work. Intellectually, I know it couldn’t have been Covid, but something about it keeps scratching at the back of my mind. I’m really paranoid about her getting it again; I can only imagine how much I’d be worrying if she were still little!

Oh yeah, I aged I think 10 years on the drive from work to the hospital after I got the call. Since then, we’ve all had colds, etc but no one has tested positive. Our doctor put it this way: you’ve had it, but may not have known, but you’ve been exposed.